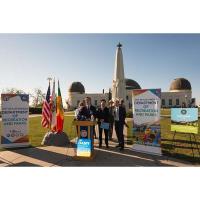 LOS ANGELES – The City of Los Angeles will begin weekday DASH bus service to Griffith Observatory and the Greek Theatre beginning Tuesday, March 21, 2017, in an effort to improve access and reduce traffic congestion. With weekend service already in place, there will be access every day from the Metro Red Line Vermont/Sunset Station to the two historic venues, local hiking trails, and Hollywood Sign viewing.

“Griffith Park is an L.A. treasure — and everyone should be able to experience the amazing natural scenery, breathtaking views, and incredible attractions,” said Mayor Eric Garcetti. “Expanded DASH service will give both Angelenos and visitors a convenient, affordable alternative to taking their cars up there — making it easier on the environment, taking the hassle out of finding a parking spot, and giving people more time to enjoy a place that has so much to offer.”

The new DASH Observatory bus service, operated by LADOT Transit, will run seven days a week, including Mondays when the Observatory is closed. Hours of operation will be daily from 12:00 noon-10:00 p.m. weekdays and 10:00 a.m.-10:00 p.m. weekend days. The DASH Observatory buses will run every 20 minutes, with stops in Griffith Park at the Greek Theatre, Griffith Observatory, and Mt. Hollywood Drive, as well as along Hillhurst Avenue in Los Feliz Village. The Metro Red Line Vermont/Sunset Station will offer the new daily bus connection, which enables riders from across the region to travel to the Observatory and Greek Theatre easily by public transit.

“Griffith Park is the crown jewel of the City’s park system, but it is being loved to death. This plan provides Angelenos and tourists with alternative transportation options which will improve overall traffic circulation, increase park access, and provide safeguards for negatively impacted neighborhoods near Griffith Park and the Hollywood Sign,” said Councilmember David Ryu.

The Department of Recreation and Parks has actively been working to improve traffic flow with some physical and directional changes already implemented on the roads around the Observatory.

“Step by step, we are making changes to improve access and the visitor experience in and around Griffith Park,” said Michael Shull, General Manager, Department of Recreation and Parks. “All of these changes are part of a larger initiative to manage the ever-growing popularity of the Greek Theatre, Griffith Observatory, and Griffith Park hiking trails.”

The new bus service has been a collaborative effort between Councilmember David Ryu, LADOT, Metro, and the Department of Recreation and Parks. LADOT General Manager Seleta Reynolds said, “We continue to strive for ways to thank people for riding LADOT Transit and put our riders first. DASH service to Griffith Park Observatory is another example of giving riders a fast, hassle-free, and affordable way to visit some of the City’s best places.”

“By connecting this shuttle service to Metro’s Red Line Station at Sunset and Vermont, it will open the door to additional opportunities for riders to experience all the amenities offered at Griffith Park and the Observatory,” said Metro Board Chair John Fasana. “Metro is always looking for ways to bridge the first/last mile gap that enhances our service to the two communities we serve. LADOT’s expanded shuttle service now bridges that gap and will benefit users of both systems to get where they need to go.”
The expanded service schedule is being funded from revenues generated by new paid parking stations in the Observatory parking lot and along its main access road. The pay stations will also operate the same hours as the Observatory (including Mondays). The charge for parking will be $4.00 per hour (with no time limit), and charges take effect on March 21.

"The new DASH Observatory Shuttle will help visitors from around the world take advantage of the Park’s numerous recreational and educational attractions, including viewing the iconic Hollywood Sign. At the same time, the shuttle is an important step in lessening the auto traffic burdening the neighborhoods adjoining the Sign," said Chris Baumgart, chairman of the Hollywood Sign Trust. "This is an example of the City of Los Angeles listening to the community, and we congratulate the Department of Recreation and Parks, the Los Angeles Department of Transportation, and Councilmember David Ryu, Fourth Council District, on making this happen.”

The Department of Recreation and Parks maintains over 16,000 acres of parkland with over 430 neighborhood and regional parks, 184 recreation centers and facilities, 368 children’s play areas, 321 tennis courts, 256 ball fields, 31 senior centers, 13 golf courses, nine dog parks, 24 skate parks, 61 swimming pools, 12 museums and an urban forest of one million trees and 92 miles of hiking trails. The Department also provides after school enrichment programs for children and teens including music, dance, and athletic programs. For more information about the Department of Recreation and Parks, please visit www.laparks.org.

Griffith Observatory is owned and operated by the City of Los Angeles, Department of Recreation and Parks. The Observatory is located on the south slope of Mount Hollywood in Griffith Park. The building is open to the public six days a week (Tuesday – Sunday), with free admission. Free public telescope viewing is available every evening the Observatory is open and the sky is clear. Live shows in the Samuel Oschin Planetarium are offered every 60-90 minutes for a modest charge.

LADOT Transit is the largest operator of municipal transit services in Los Angeles County providing commuter bus and neighborhood circulator services as well as mobility services to seniors and the disabled. LADOT Transit provided 19,330,100 trips on these services in 2015. LADOT provides Commuter Express, point-to-point bus service, from the San Fernando Valley, Thousand Oaks, Calabasas, the Beach Cities, El Segundo, and the Westside to Downtown Los Angeles as well as between Pasadena and Glendale, San Pedro and Long Beach and from the San Fernando Valley to the Westside and South Bay. DASH circulator bus services operate in Downtown Los Angeles and 27 other neighborhoods in the City of Los Angeles. Cityride is the largest voluntary paratransit program of its kind in the nation, offering essential transportation services to seniors and the mobility challenged.

The Hollywood Sign Trust is a 501(c)3 non-profit trust responsible for repairing, maintaining, refurbishing and providing capital improvements to the Hollywood Sign for the benefit of the public at large. More information about the Sign’s history and the Trust can be found at: www.hollywoodsign.org.
Contact:
Hollywood Chamber
info@hollywoodchamber.net, (323) 469-8311