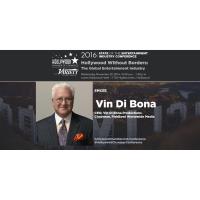 The Hollywood Chamber of Commerce is pleased to announce that Producer Vin Di Bona will once again return in his role as Emcee the fifth State of the Entertainment Industry Conference presented by the Hollywood Chamber of Commerce and Variety. The conference is the pre-eminent local forum that focuses on the importance of the Entertainment Industry to California and steps that need to be taken to keep it healthy.

The theme selected for the 2016 conference is “Hollywood Without Borders”. It will be held at Loews Hollywood Hotel, 1755 N. Highland Ave., on Friday, November 30. Registration will begin at 8:30 a.m. with the sessions running from 9 a.m. to 1:30 p.m. The conference includes breakfast and lunch. Co-chairs are Sharon Keyser, Senior VP, Real Estate, Government & Community Relations for Paramount Pictures and Doug Troy, COO and CFO for Trailer Park.

A four-time Emmy award-winning producer and eight-time Emmy nominee, as well as recipient of the prestigious George Foster Peabody Award for his work in documentary programming, Vin Di Bona is CEO of Vin Di Bona Productions and Chairman of FishBowl Worldwide Media.

A pioneer in comedic reality television, Di Bona shook the foundations of the television industry when he introduced America’s Funniest Home Videos in 1989. Not only credited with bringing the reality genre to network broadcasting, twenty-five years later it seems that Di Bona also set the stage for today’s universal YouTube culture by creating an appetite and platform for user-generated content.

His other reality-based specials and series include America’s Funniest People, I Survived A Disaster, The Big Moment, Chicken Soup For The Soul, Show Me The Funny, The Extraordinary World of Animals, Meet the Marks, The Dating Experiment and Animal Crack-Ups, the first show produced under his own banner in 1986. Animal Crack-Ups, like AFV, was based on a show from the Tokyo Broadcasting Company, making Di Bona the first television producer to import a Japanese format to the U.S.

Beyond reality television, Di Bona’s diverse experience in producing and directing includes television movies, broadcast and cable series, network specials, music award shows and variety programming. Among those are Entertainment Tonight, Papal Spacebridge’87, MacGyver, Trump Unauthorized and the Showtime series, Sherman Oaks. He has also produced three highly acclaimed movies-of-the week, For the Love of Nancy, Touched By Evil and Voices From Within, as well as documentaries, including Down at the Dunbar, for which he won the Peabody.

In addition to executive producing and directing AFV, Di Bona is currently executive producer on several television series, including the Animal Planet reality series, Insane Pools: Off the Deep End.

After a four-year stint as Chairman for the Caucus for Television Producers, Writers & Directors, Di Bona was honored with the organization’s Chair’s Award in 2008. To commemorate the show’s contribution to American culture, America’s Funniest Home Videos became part of history in 2009 when The Smithsonian Institution selected the show for inclusion into their permanent entertainment collections. Di Bona was honored again in 2011 when he was inducted into the Rhode Island Heritage Hall of Fame.

Di Bona is Vice-Chairman of the Board of Trustees at Emerson College which bestowed upon him an Honorary Doctorate Degree, Doctor of Humane Letters.  He holds the position of Chairman, Paulist Productions Board of Directors, is a member of the Board of Trustees for the St. James Inn and served as Chairman for the Caucus for Television Producers, Writer & Directors for four years.  In addition to being a board member for the Center Theatre Group in Los Angeles and the Newport Music Festival, Di Bona is currently active in Teach for America, the Newport Historical Society and the Preservation Society of Newport in Rhode Island. He currently serves on the Board of Directors for the Smithsonian Institution.