The Hollywood Way: Solutions through Creativity 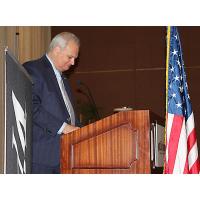 This past year as Chairman of the Board has passed in a blink of an eye for me, yet that blink puts into perspective just how profoundly Hollywood evolves in a year – as well as what challenges and opportunities remain on the Chamber’s agenda as to how Hollywood is and will be perceived on the global stage. I sincerely appreciate and thank the Board of Directors for honoring me to represent and serve our mission to promote and enhance the business, cultural and civic well-being of Hollywood - the place I love and call home, as well as Hollywood - the brand.

Let me take this opportunity to reflect how you, our Hollywood champions, moved the Chamber’s mission this past year.

Successful Accomplishments:
Hollywood Economic Growth: our annual Hollywood Economic Development Summit last June tackled Hollywood Livability, tallying over 92 housing projects with 9,700 units, 16 hotels with 2,500 rooms either under construction or in the pipeline for our community. On the commercial front, 1,143,000 sq. ft. of office space was under construction and/or proposed - an impressive amount of development resulting in thousands of construction jobs and permanent jobs as well.

New Board Room Star Table: We commissioned the Star Table to complement our new boardroom utilizing the Chamber’s Walk of Fame trademark. Special mention and thanks to interior designer Katy Naghavi of Atelier Katayon Interior Design, who donated her services, and Vaughan Benz, a top-quality furniture manufacturer located in Downtown Los Angeles.

Anniversary Celebration: Our President and CEO, Leron Gubler, celebrated his 25th anniversary at the helm of the Chamber. To mark the occasion, the Chamber hosted a star-studded anniversary celebration recognizing members, staff, actress Tippi Hedren and producer Vin Di Bona.

We must still press on for CEQA reform: The California Environmental Quality Act has devolved into an abusive system to kill worthy projects and to shake down developers for money. Our public officials in Sacramento need to get serious about needed reforms. The blame for the affordable housing crisis in this state lies at their feet because they have refused to reform CEQA.

Homeless Challenges: The tragedy of homelessness continues to get worse year after year. Voters approved two measures (H and HHH) this past year to build more housing and services for the homeless, however much more still needs to be done. Homelessness is the greatest negative impact to Hollywood’s future. We need all hands on deck to come up with additional creative solutions to combat this crisis.

Hollywood Community Survey: The Chamber commissioned Renegage to do economic research and study for the Hollywood community which will be released at the Economic Development Summit in June.

Presidential Search: Soon after our President & CEO, Leron Gubler, announced his retirement in January after 26 years at the Chamber, I formed an ad hoc Presidential Search Committee to search for new candidates for his position. We plan to have the position filled by September, with a start date at the end of the year.

While so much can change in a year, our purpose at the Hollywood Chamber remains fundamentally the same - our mission is to promote and enhance the business, cultural and civic well-being of Hollywood. This founding principle empowers us as leaders to create, to take risks, and to forge a path forward toward solutions – all of which are possible if we stay true to our creed. Let’s continue to create, to dream and inspire new solutions for Hollywood and the world as all eyes are on us!

Jeff Zarrinnam, Chair of the Board, Hollywood Chamber of Commerce