Summit to Focus on Challenges of Change in Hollywood 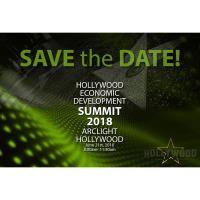 The Challenges of Change: Finding Solutions” will be the theme of the 24th annual Hollywood Economic Development Summit, set for Thursday, June 21st at the ArcLight Hollywood. The popular progress event for Hollywood will run from 8 a.m. to 11 a.m., according to co-chairs Tim Grubbs of Communitas Design and Marty Shelton of NAI Capital Commercial.
“Hollywood is known for entertainment, but it is also an innovation hub,” said Grubbs. “Its urban center is positioned to adapt and embrace the changes brought about by technological advances. We will be looking at how changing technology could impact mobility and development in Hollywood.”
Networking with a continental breakfast will begin at 8 a.m., while the program will start at 9 a.m. Admission to the summit will be $50 for registrations received through May 21st, $65 thereafter with advance registration, and $75 at the door.
L.A. Councilmember Mitch O’Farrell will open the conference. Introducing the theme, will be Katherine Perez-Estolano, the Cities Leader for Arup, the global design and consulting firm for the built environment. Perez-Estolano is an expert in community development, real estate and infrastructure development, transportation policy and urban planning.
There will be two panels at this year’s conference. The first is entitled “The Retail Revolution for Hollywood.”
“This panel of retail specialists will discuss the results of a Hollywood Chamber-commissioned report exploring retail opportunities in Hollywood, and will address the perception of retailers considering doing business in the neighborhood,” said Shelton.
Panelist will include: Keith Kaplan, vice president of development for Westfield Corp.; David Sheldon of the Retail Design Collective; Pat Barber, vice president of real estate for Smart & Final; and Michael Dubin, founder, Michael Dubin and Associates.
The second panel is titled “Technovation in Transportation and the Impacts on Development”. Panelists will include: Grayson Brulte, co-founder of Autonomous Tomorrow; John Rossant of LACoMotion; Dr. Donald Shoup of the UCLA Department of Urban Planning; and Seleta Reynolds, general manager of the L.A. Dept. of Transportation.
The Keynote speaker for the conference will be Dr. Marlon Boarnet, professor of public policy and director of graduate programs in urban planning at the Sol Price School of Public Policy at USC. Professor Boarnet is a renowned authority on urban economics, urban growth patterns, transportation and regional science. He served on the National Research Council committee that authored “Driving and the Built Environment.”
In addition, Chamber President & CEO Leron Gubler, who has announced his retirement at the end of the year, will present the Excellence in Economic Development Award to a local developer who has invested in Hollywood.
As of press time, the following sponsor businesses have been identified:
Diamond Level sponsors include J.H. Snyder Co., Kilroy Realty Corp., Strategic Legacy Investment Group.

Admission is $50 through May 31st, $65 thereafter.
Discounted parking is available at ArcLight with validation.