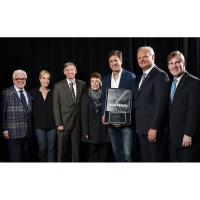 “The State of the Stream” was one of the key topics of the Hollywood Chamber’s sixth annual State of the Entertainment Industry Conference which focused on the rapidly evolving industry. This is the one conference that highlights the importance of the entertainment industry to our local economy,” said Leron Gubler, President & CEO of the Hollywood Chamber of Commerce. “With the rapid changes in the industry due to technology, we want to keep the public informed on what this means for our communities.”

This year’s conference once again took place at the Loews Hotel Hollywood on November 30th. Susanne Ault of Variety and Kristin Cavanaugh of Sony Pictures Entertainment were the co-chairs of the half-day conference. Television producer Vin Di Bona returned in his role as emcee for the sixth consecutive year.

Councilmember Mitch O'Farrell of Council District 13 presented greetings from the City of Los Angeles. California State Senate President pro Tempore Kevin de León delivered a keynote speech at the conference. De León was a key player in the approval of AB1839, the California tax credits bill that is credited with saving hundreds of local jobs. He is also a candidate for the U.S. Senate.

During the event, Steve Levitan, Co-creator, Executive Producer of Modern Family was recognized with 2017 Commitment to California award. He was interviewed by Debra Birnbaum, Executive Editor, TV, at Variety.

View more pictures from the 2017 State of the Entertainment Conference