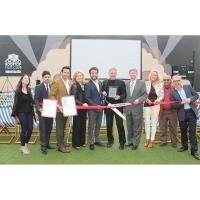 The Hollywood Chamber of Commerce welcomed Rooftop Film Club at The Montalbán with a ribbon-cutting ceremony on Wednesday, April 6th. The 2016 Opening Night started with a bang screening the new Star Wars: The Force Awakens movie to a sold out crowd. Since its debut last year, the movie event has become a staple of Hollywood’s culture scene and has sold out tickets to almost every screening.

Last year in August, the UK’s outdoor cinema experience advanced its stateside road trip and brought its own brand of movie magic to Hollywood. Rooftop Film Club made its latest spot on the rooftop of the historic Montalbán Theatre on Hollywood’s Vine Street. The exciting outdoor film experience shows classic, cult and recent film releases and promises an alternative movie experience allowing you to enjoy the very best of film under Hollywood’s bright sky. Film lovers are able to lounge on comfy chairs and watch their favorite movies on the big screen.

“As the home of film, it’s a dream come true to bring our exciting cinema experience to Hollywood. With its amazing history and iconic location alongside the world-famous Walk of Fame, the Montalbán Theatre is the perfect venue for our West Coast home-from-home,” said Gerry Cottle Jr., Founder of Rooftop Film Club.

The funds to bring Rooftop Cinema Club to Hollywood started with Nike and LA84 which ivnested $1.3-million with the original construction of the Montalbán Roof Court. The theatre has seen an additional $150,000 in improvements, screening and audio equipment and fixtures with the 2016 Opening of the Rooftop Cinema Club.


Gilbert Smith, Chair of the Ricardo Montalbán Foundation is very pleased about converting the roof court into a dining and movie event space. “In certain respects this is a performance art for social communities and we’re very proud to be the first West Coast theatre to get on board,” Smith said. “Our Roof Court has transformed into an oasis that harkens back to the days of the Deco period for 20th Century Cinemas.”

The theatre have installed green turf, classic striped deck chairs from Brighton Beach England, social hour romantic sunset lighting, and a changing menu of enticing food that will be followed by a different movie Tuesdays through Saturdays.

Some of this year’s titles include Straight Outta Compton, Carol, Tangerine, Casablanca, The Big Short and more. Tickets must be bought online prior to the event as the theatre offers limited seating capacities. All shows sell out. The Montalbán Rooftop opens at 6 p.m. and serves fresh food and drinks until 11 p.m. Rooftop Cinema Club Box Office opens an hour before screening time. Come dressed up or down, and keep the children at home as they do not allow anyone under the age of 18 at this time.

The first batch of general admission tickets is on sale now. General admission tickets are $17 (plus a $2 booking fee). Once you have a ticket and find yourself on the rooftop, get yourself one of their comfy deck-chairs and enjoy the movie’s audio via headphones. Seating is unallocated and they recommend larger groups arrive early to ensure they can sit together. The show goes on come rain or shine. On rainy days, the Club has you covered with complimentary waterproof ponchos!