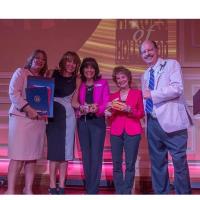 More than 400 people attended the annual fundraiser where the Heroes Of Hollywood Awards luncheon presented by the Hollywood Chamber Of Commerce Community Foundation honored Hollywood’s favorite Pink’s Hot Dogs on June 1st at the Taglyan Cultural Complex. Returning for another year in their roles as Co-chairs were Carol Sarian and Cindy Braun. ABC Entertainment guru George Pennachio served as celebrity Emcee.

Our HERO Pink’s Hot Dogs is a 77-year-old landmark hot dog stand located at La Brea and Melrose in Hollywood.  Pink’s was started in 1939 by Paul and Betty Pink with a pushcart they purchased for $50.  The land on which the pushcart stood was leased for $15 per month; hot dogs at that time were 10 cents.  In 1941, Paul and Betty acquired the land through a bank loan for $4,000.  In 1946, Pink’s hot dog stand was built.  Paul and Betty operated the hot dog stand until 1985 when they retired and turned over the business to their family: Richard, Gloria, and Beverly.

Today, Pink’s attracts customers and tourists to Hollywood from around the globe. The hot dog stand is widely known for its unique atmosphere, variety of hot dogs, and Celebrity Wall of Fame. The dining room is famously filled with over 200 autographed photos of Hollywood celebrities who love Pink’s!