Panel to Discuss State of the Stream at Entertainment Conference, Nov 30th 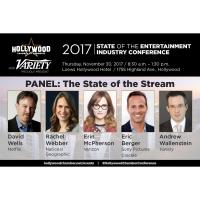 “The State of the Stream” will be one of the topics of the Chamber’s Entertainment Industry Conference. This year’s conference will take place at the Loews Hotel Hollywood on Thursday, November 30th. The half-day conference will start with networking at 8:30 a.m. followed by a packed program through 1:30 p.m. Early Bird Special rate through Friday, November 17th is $129. Admission thereafter is $159.

As the growing ‘entertainment-on-demand’ audience continues to build a complex streaming economy, a new group of media power players are calling the shots. Their business strategies vary from subscription to ad-supported models, and the experiences are enhanced with user-generated content mixed with premium offerings across many platforms. In a crowded field, the streaming elite debate what’s next for this industry.

Susanne Ault of Variety and Kristin Cavanaugh of Sony Pictures Entertainment are co-chairs of the 2017 State of the Entertainment Industry Conference. Vin Di Bona will return in his role as emcee for the sixth consecutive year.

For more information about the State of the Entertainment Industry Conference, contact Kaylee Kiecker at kaylee@hollywoodchamber.net.