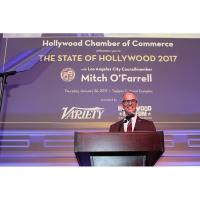 In his report, Councilman O’Farrell emphasized how we must “relentlessly strive to help Hollywood reach its full potential, to be more livable, to be the most desirable place to do business, to welcome tourists, to celebrate its past, and be very thoughtful how we evolve into the future.” He discussed affordable housing, housing options, homeownership, pedestrian safety, sidewalk improvement projects, landscaped medians, healthcare, and more. He talked about the need to update all community plans in the city within 10 years and noted that there are important issues to keep an eye on such as a 2-year construction moratorium on the March 7th ballot.

The event was an excellent opportunity for attendees to network and gain exclusive insights on jobs and the local economy, increasing the affordable housing stock, walking in Los Angeles, and public safety.

O’Farrell has built a solid reputation as a Councilmember who understands the importance of maintaining a healthy business climate. He led the fight to be sure that the City Council considered business impacts before voting to raise the minimum wage. He was the first Councilmember to go on the record opposing Measure S, the Neighborhood Integrity Initiative that would slap a building moratorium on Los Angeles. He is working to create opportunities for more affordable housing and to reform City policy to help small, neighborhood businesses that drive the local economy. He recently pledged at the Chamber’s State of the Entertainment Industry Conference, that he will work to address issues that make it difficult for the film industry to shoot in Los Angeles.

The Councilmember’s district is the most diverse in the City, including the neighborhoods of Atwater Village, East Hollywood, Echo Park, Elysian Valley, Glassell Park, Historic Filipinotown, Hollywood, Mid- Wilshire/Koreatown, Rampart Village and Silverlake. He understands the importance of Hollywood, its history, and its brand as a unique one-of-a-kind destination place for the rest of the world, noted Gubler. “He is working to enhance Hollywood’s reputation as a world-class neighborhood in which to live, do business and visit,” said Gubler. “He promotes that it is an economic driver for the rest of L.A. as the entertainment capital of the world and a worldwide destination for tourists.”