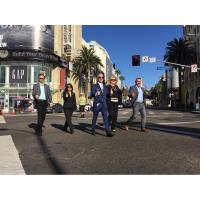 One of the city's busiest intersections has seen significant safety benefits one year after the installation of a pedestrian safety improvement, Los Angeles City Councilmember Mitch O’Farrell, (CD13) and the Department of Transportation (LADOT) announced Monday.

LADOT says there have been zero pedestrian collisions since a new scramble crosswalk was installed at the intersection of Hollywood Boulevard and Highland Avenue. The special crossing system allows everyone to enter the roadway from each corner, in all directions, including diagonally, at the same time.

“The Hollywood Scramble has created a safer environment and has enhanced the pedestrian experience at one of the most iconic intersections in all of Los Angeles,” said Councilmember O’Farrell.  “I want to thank the Department of Transportation for working with my office and neighborhood stakeholders to improve the built environment, and for keeping residents and visitors alike out of harm’s way.”

According to LADOT data there were eight pedestrian collisions at the intersection of Hollywood Boulevard and Highland Avenue between 2009 to 2015. A scramble crosswalk is estimated to cost $100,000 to install.

“We are proud of the results at Hollywood and Highland,”  said Seleta Reynolds, LADOT General Manager. “Since LADOT's installation one year ago no one walking or biking has been injured. Simple changes can save a life."

City officials have conducted outreach over the past year to educate the public on the installation, raise awareness with drivers and show people how to safely cross the street on foot or bicycle, as well as navigate the intersection by car.

Users are encouraged to spread the word about this safety feature on social media using the hashtag #HollywoodScramble.