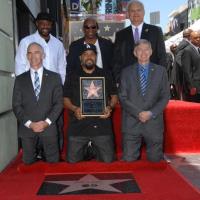 The Hollywood Chamber of Commerce proudly honored award-winning actor, director producer and music icon Ice Cube with the 2,614th Hollywood Walk of Fame star on Monday, June 12, 2017 at 11:30 a.m. PDT. The star was dedicated in the category of Recording at 6752 Hollywood Boulevard in front of Musicians Institute.

Ice Cube [O’Shea Jackson] was born in South Central Los Angeles, to Doris a custodian and hospital clerk, and Hosea Jackson, a UCLA groundskeeper. Known to be one of the most important figures in rap history, Ice Cube first came to public notice as a rapper and songwriter with the controversial and influential West Coast gangsta rap group N.W.A over two decades ago. After penning the most memorable lyrics on N.W.A.’s groundbreaking songs “Straight Outta Compton” and “Gangsta, Gangsta” and “Express Yourself,” Ice Cube left the group at the height of their success to start his own solo career. In 1990, Ice Cube released AmeriKKKa’s Most Wanted, his debut studio album, an unexpectedly large critical and commercial success and considered to be one of the defining hip hop albums of the 1990s. With a career spanning the release of nine solo albums and more than 10-million albums sold to date, Ice Cube remains one of music’s most respected and influential artists today.  In 2016, he was inducted into the Rock & Roll Hall of Fame with his group N.W.A. Cube is currently gearing up for the release of the 25th anniversary edition of his highly controversial second album Death Certificate on June 9th which will include three brand new songs.  Recorded in the wake of the Rodney King beating in 1991, the incendiary LP, which debuted at No. 1 on Billboard’s Top R&B/Hip-Hop Albums chart, takes a potent look at life in South Central through the eyes of one of rap’s greatest and grittiest storytellers.

As an accomplished producer through his company, Cube Vision (Friday, the Barbershop, Are We There Yet? andRide Along franchises), writer (Friday, The Players Club, The Janky Promoters) and director (The Players Club), Ice Cube has established himself as one of entertainment industry’s most reliable, relevant, and prolific figures both on and off the screen.

As a television producer, Cube Vision took the Barbershop and Are We There Yet? series to successful network runs, and also enjoyed success with the controversial Black. White. His production company’s latest project,Hip Hop Squares on VH1 became the highest rated non-sports show to air in prime time when it premiered in March 2017.

In 2015, Straight Outta Compton, which Cube helped inspire and produced through his company Cube Vision was released. The critically acclaimed film held the No. 1 spot at the box office three weekends in a row and grossed over $200-million on a mere budget of $28-million. The Universal Pictures-released movie went on to receive countless awards and accolades including nominations with the Academy Awards, Critics Choice Awards, SAG Awards, Producer Guild of Americas Awards, Writers Guild of America Awards, Golden Globes and won for Best Picture at the NAACP Image Awards, True Story at the MTV Movie Awards, and many more.