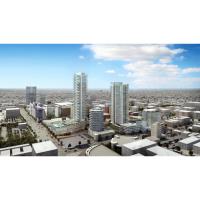 Millennium Partners is pleased to announce that the Los Angeles Department of Building and Safety (LADBS) has approved the Millennium Hollywood Fault Investigation Report, and agreed that the development site has no active earthquake faults and is safe for development.

Because of the many questions that have been raised about the seismic safety of the Millennium Hollywood project, the Hollywood Chamber is pleased to provide this information about conclusions drawn by L.A.’s Department of Building and Safety.

The extensive report, which includes data from on-site trenching, soil borings, and cone penetrometer testing, provides the most detailed and rigorous subsurface analysis ever undertaken of urban geologic conditions at any site in Hollywood. It specifically addresses the most recent comments of the California Geological Survey (CGS) and numerous additional questions and requests made by the City of Los Angeles. The report provides overwhelming evidence confirming that there is no active earthquake fault on the Millennium Hollywood property.

The Fault Investigation Report was compiled by Group Delta, a geotechnical engineering firm with over 30 years of experience working on some of the most complex geological and geotechnical projects in Southern California. The firm’s prior work in the region includes the Regional Connector in Downtown LA, the Purple Line extension, and Playa Vista, among many others.

Dr. Roy Shlemon, an internationally renowned expert in soil stratigraphic dating, collaborated on the report. Dr. Shlemon’s work has been published in 225 geology journal articles during his storied career, and he has held multiple prestigious professorships and received numerous awards.

Following completion, the report underwent a wide-ranging peer review by Earth Consultants International, an award-winning geology firm with over 50 years of combined experience investigating earthquake fault hazards in California. Although not required, the extensive peer review confirmed the findings of Group Delta and Dr. Shlemon and provided LADBS with additional expert input regarding the site.

“We are gratified that after a thorough review by its professional staff of geologists, the Department of Building and Safety has agreed that the Millennium Hollywood development site has no active earthquake faults and is safe from the risk of surface rupture,” said Philip Aarons of Millennium Partners. “We have been committed to seismic safety on this site from the beginning of the planning process.”

As mandated by California’s Alquist-Priolo (AP) Act, the California Geological Survey created an Earthquake Fault Zone based on a variety of general external and non-site-specific data. The CGS’s mapped Earthquake Fault Zones serve as a guide for where to look for active faults, not conclusive evidence of where in fact they exist. Then, the local jurisdiction (LADBS) supervised extensive site-specific geological studies in the zone to determine if active faults exist underneath the Millennium Hollywood properties. The AP Act mandates that cities work with property owners to conduct conclusive seismic studies after a site is placed within a zone because only site-specific studies can actually prove or disprove the existence of an active fault.

For this site Millennium Partners undertook the most extensive urban geological subsurface investigation in the history of the City of Los Angeles. The investigation included: inserting 103 cone penetrometer subsurface probes; drilling, logging, and backfilling 20 continuously cored borings; and excavating, logging, and backfilling two trenches that covered a total length of 412 feet and a depth of up to 38 feet. Geologists representing the Department of Building and Safety and the California Geological Survey inspected the Millennium trench during multiple site visits. Representatives from the CGS and the LADBS also examined first-hand at Group Delta’s offices the soil core samples from the borings that were obtained.

The Department of Building and Safety conducted a thorough independent review of the Group Delta report and concurred with its findings, conclusions, and recommendations. “As far as we’re concerned the report speaks for itself,” David Lara, a spokesman for the LADBS, told Park La Brea News / Beverly Press when the community newspaper published a story on the department’s conclusion in June. “We agree with the report.”

Numerous local community members and elected officials who have been so supportive of Millennium Hollywood throughout this long process are encouraged by the LADBS approval of the Fault Investigation Report.

“No development site in Los Angeles has ever had this level of scrutiny related to seismic concerns and today we know the facts. Combined with our city’s rigorous building standards and the extra requirements imposed for just this site, the conclusion by multiple experts is that the proposed Millennium Project is not sitting on an active fault,” said 13th District City Council Member Mitch O’Farrell. “I am confident we can move forward on a world-class project on what is currently a surface parking lot in the heart of Hollywood that will create thousands of good paying jobs, badly needed housing, and economic activity that will bolster Hollywood’s standing as a major tourist destination and one of the city’s great neighborhoods.”

With the LADBS signoff on the project site’s safety, Millennium Hollywood reaffirmed its intentions to move forward with its dynamic mixed-use project planned for the property. “Millennium Hollywood remains firmly committed to building a project that will preserve the iconic Capitol Records building and revitalize Hollywood’s historic Downtown,” Aarons said, “doing so in a manner that conforms to the highest earthquake resiliency standards.”