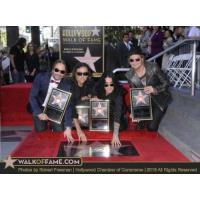 The Hollywood Chamber of Commerce honored Maná with the 2,573rd star on the Hollywood Walk of Fame on Wednesday, February 10, 2016. The star in the category of Recording was dedicated at 7060 Hollywood Boulevard in front of Live Nation.

Helping Emcee and Hollywood Chamber President/CEO Leron Gubler to unveil the star were Carlos Santana. “As one of Latin America’s most popular Rock bands, Maná is sure to bring many fans to Hollywood for the dedication ceremony. They are not only well known throughout Latin America, here in the United States and across the world as well!” stated Ana Martinez, Producer of the Hollywood Walk of Fame ceremonies.

Billboard magazine has heralded Maná as “the most widely sold and heard Latin band in the world.” Having formed in Guadalajara, Mexico in 1986, the quartet of Fher Olvera, Alex González, Sergio Vallín and Juan Calleros have gone on to be global ambassadors for the Latin Rock genre, while selling over 40-million albums. To date, Maná has been recognized by their musical peers with four Grammy and eight Latin Grammy awards. In the United States, Maná holds an impressive nine   No. 1 albums and ten No. 1 singles - more than any other band in the history of Billboard’s “Hot Latin Songs” chart. Maná is also the top-drawing all-Spanish language concert band in the U.S. – regularly selling out arenas across the country. The band holds the record for the most shows sold-out by a single band in the history of Staples Center in Los Angeles. The band’s ability to fill the famed venue for seven nights on their last tour alone saw the New York Times declare that the legendary band from Mexico has “redefined ‘crossover’ in Latin pop”.

Maná founded and continue to finance the Selva Negra Foundation (Fundación Ecológica Selva Negra) which has become one of Latin America’s leading voices for environmental protection. One project example is working with the Mexican government to raise 140,000 turtle eggs for release on the country’s Pacific coast to re-establish the endangered species. Maná and the Selva Negra Founation were named “Champions of Health” by the Pan American Health Organization. The band also acts as goodwill ambassadors for The Food and Agriculture Organization of the United Nations.