Leron Gubler: The Man in the Heart of Hollywood 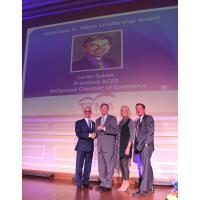 Leron Gubler has been at the helm of the Hollywood Chamber of Commerce as the President and CEO since taking office in 1992. Gubler has been serving the Chamber for 24 years and is one of the leading catalysts in the Chamber’s and Hollywood’s resurgence in the Los Angeles community. The Travel and Tourism Marketing Association recognized Leron Gubler with the 2016 Anastasia K. Mann Leadership Award which was presented to him by Councilmember Mitch O'Farrell (CD13) at the Taglyan Cultural Complex on October 4th the Taglyan Cultural Complex on October 4th.

Solidifying himself early on in his career as a poised leader, Gubler has worked within the organization with an emphasis to align the Chamber with its mission to promote and enhance the business, cultural and civil well-being of Hollywood.

The Brigham Young University alum, who earned his Master’s in Public Administration assisted in the development of four successful business improvement districts and has testified on behalf of the Hollywood Chamber of Commerce to bring new projects and revitalize economic development in the Hollywood community.

Within a year into office, the former director of the San Pedro Peninsula Chamber of Commerce, Gubler oversaw the creation of the Hollywood Chamber of Commerce Community Foundation to assist the community and local organizations.

In 2010, the seasoned Chamber veteran successfully elevated the Chamber’s advocacy rank by creating the Hollywood Chamber of Commerce Political Action Committee. The PAC has given the Chamber the means to empower the voice of the Hollywood business community amongst elected officials.

Two years later, in 2012, Gubler initiated the Chamber’s first Entertainment Industry Conference. The event created an opportunity to bring industry experts together with public officials to deliberate on what needs to be done to maintain a healthy entertainment sector. The summit addressed such issues as competition from other states and countries, content theft and piracy, and opportunities in the entertainment industry. The summit this year will be held at Loews Hollywood Hotel Wednesday, November 30th.Wearing many hats, Gubler replaced the gone, but never forgotten Mayor of Hollywood, Johnny Grant as the emcee for the famous Hollywood Walk of Fame ceremonies promoting both the Chamber and Hollywood around the world.

Always pleasant, the eloquent Gubler has been boasted as a great communicator and a mentor by his peers at the Western Association of Chamber Executives where he currently serves on the board.

A native of California, Gubler currently resides in La Crescenta, Calif., with his wife Audrey and two children, Lauren and Seth.

Q: Growing up, what did you want to do?
A: Although I didn’t have a firm idea, as a young person I seriously thought about going into law. However, I also was interested in marketing, and I do recall once going into the local chamber of commerce to get some brochures and a map and thinking that might be an interesting place to work.

Q: Why should Hollywood be a top destination for tourists around the world?
A: Hollywood is arguably the most famous brand in the world. Primarily due to the constant reinforcement of news about the industry, millions of people come to Hollywood each year. There is so much more that the city could do to develop the brand if there were a concerted effort to create a strategic plan for Hollywood’s development.

Q: Being the first face and voice broadcasted at the Hollywood Walk of Fame ceremonies, have you ever been nervous introducing Hollywood’s elite?
A: Absolutely, I was nervous about doing introductions and emceeing the Walk of Fame – especially when I started. The first time I had to emcee a ceremony came with very little notice when Johnny Grant was stuck in an airport on the East Coast and could not get here. That was a ceremony for Queen Latifah. It has become much easier now that I have done this more than 200 times.

Q: If you were to recommend the perfect night out in Hollywood, what would it be?
A: There are so many possible “perfect” nights out in Hollywood: be it a twilight ride in the Hollywood Hills at Sunset Ranch Stables, or an evening at the Magic Castle, or dinner at one of our fine restaurants followed by a play at the Pantages or music at the Hollywood Bowl.

Coltrane Powdrill is an intern at the Hollywood Chamber of Commerce currently majoring in Communication at California Lutheran University. He enjoys playing basketball, asking questions, and spending time with family and friends.