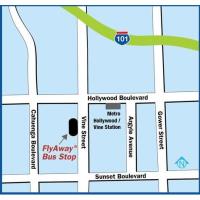 The Hollywood stop for the FlyAway® nonstop bus service to Los Angeles International Airport (LAX) is moving to 1627 North Vine Street, effective Wednesday, March 1st. The new location is on the west side of Vine, one-half block south of Hollywood Boulevard and one-tenth of a mile northwest from its previous location, where construction necessitates the change.

"In addition to Hollywood being a world-class destination, it is also a neighborhood that needs convenient, affordable transportation options to LAX," said Councilmember Mitch O'Farrell, whose District 13 includes the FlyAway® Hollywood bus stop.  "This new location on Vine Street south of Hollywood Boulevard is in a prime location next to public parking and near the 101 Freeway."

"Over the years, the FlyAway® bus has become an indispensable resource for locals and visitors alike looking for convenient ways to travel to and from LAX,” said Los Angeles World Airports Deputy Executive Director for External Affairs Trevor Daley.  “While the location is changing, the bus schedule between the new stop and LAX will stay the same.”

Buses depart from the Hollywood bus stop to LAX every hour from 5:15 a.m. to 9:15 p.m.  Buses depart LAX Terminal 1 to Hollywood every hour from 6:15 a.m. to 10:15 p.m.  Bus fare is $8 one way, payable on the bus or online with American Express, MasterCard, or Visa credit or debit cards.  Two children age five and under ride for free with each paying adult.  Cash is not accepted. FlyAway® travel information, including links to purchase tickets, can be found at www.LAXFlyAway.org.

The Hollywood FlyAway® route served 86,123 passengers during 2016.  Under new management, its on-time performance was greater than 99.5 percent for the period from July 2016 to January 2017, which accounted for a total of 7,310 trips.  The Hollywood service also offers free Wi-Fi.

LAX is the seventh busiest airport in the world and second in the United States.  LAX served more than 80.9 million passengers in 2016.  LAX offers 742 daily nonstop flights to 101 cities in the U.S. and 1,280 weekly nonstop flights to 77 cities in 42 countries on 64 commercial air carriers.  LAX ranks 14th in the world and fifth in the U.S. in air cargo tonnage processed, with more than 2.2 million tons of air cargo valued at over $101.4 billion.  LAX handled 697,138 operations (landings and takeoffs) in 2016. An economic study based on 2014 operations reported LAX generated 620,610 jobs in Southern California with labor income of $37.3 billion and economic output (business revenues) of more than $126.6 billion.  This activity added $6.2 billion to local and state revenues and $8.7 billion in federal tax revenues.  The study also reported that LAX’s ongoing capital-improvement program creates an additional 121,640 annual jobs with labor income of $7.6 billion and economic output of $20.3 billion, $966 million in state and local taxes, and
$1.6 billion in federal tax revenues.

LAX is part of a system of two Southern California airports – along with Van Nuys general aviation – that are owned and operated by Los Angeles World Airports, a proprietary department of the City of Los Angeles that receives no funding from the City’s general fund.

For more information about LAX, please visit www.lawa.aero/lax or follow on Twitter @flyLAXAirport, on Facebook at www.facebook.com/LAInternationalAirport, and on YouTube at www.YouTube.com/laxairport1.  Information about LAX’s ongoing multi-billion-dollar LAX Modernization Program, as well as tips and shortcuts to help navigate LAX during construction, are available at www.LAXisHappening.com.
Contact:
Hollywood Chamber
info@hollywoodchamber.net, (323) 469-8311