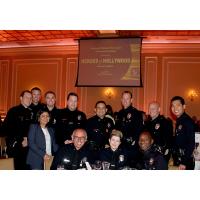 More than 400 people attended the annual fundraiser where the Heroes Of Hollywood Awards luncheon presented by the Hollywood Chamber Of Commerce Community Foundation honored Hollywoodian Beatrice Girmala, Assistant Chief or Los Angeles Police Department on June 1st at the Taglyan Cultural Complex. Returning for another year in their roles as Co-chairs were Carol Sarian and Cindy Braun. ABC Entertainment guru George Pennachio served as celebrity Emcee.

Our HERO Assistant Chief Beatrice Girmala is a 31-year veteran of the Los Angeles Police Department (LAPD). She exemplifies a lifelong dedication to public service in Hollywood and continues to be motivated by the men and women who are the first line of defense in preserving our values and freedoms in the public arena.

In 1985, Assistant Chief Girmala proudly joined the LAPD. In 1988, a Field Training Officer position opened in Hollywood, and by 1997, she achieved the rank of Sergeant. She was inspired by the dedication of patrol officers who worked in challenging conditions, yet delivered quality and professional law enforcement services. In 1999, Assistant Chief Girmala returned to Hollywood first as a Field Sergeant, and then as an Assistant Watch Commander, Sergeant II. She was given the opportunity to work for then Captain and future Deputy Chief Mike Downing, whom she credits with formative on-the-job training. Projects included “Operation Neighborhood Enhancement,” “Project Restore Hollywood,” and “Homeless Outreach.” In 2003, she was promoted to Lieutenant.

Continuing to climb the ranks, Assistant Chief Girmala completed Command Development School and was promoted to Captain in 2007. In 2008, she began her second assignment as the Patrol Commanding Officer in Hollywood. In 2013, she was promoted to Commander and then to Deputy Chief in 2015. In 2016, she was promoted to Assistant Chief and is now the Director, Office of Special Operations. Assistant Chief Girmala’s involvement in Hollywood has led to the creation of the Hollywood Entertainment District (HED) foot beat and the inauguration of LAPD’s first youth mentoring center for financially-challenged and gang-impacted areas. Her diversity of experiences and career-long efforts make her an invaluable figure in the Hollywood community.

In 2003, Assistant Chief Girmala was recognized by the Hollywood Chamber of Commerce as a “Woman of Distinction” for her work in Hollywood. She lives in Los Angeles with her daughter and credits her mother as an invaluable supporter and inspiration, as well.