Katz of BMG US to Speak at Chamber Entertainment Industry Conference, Nov. 30th 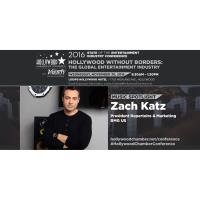 The Hollywood Chamber of Commerce announced that Zach Katz of BMG US will be offering a spotlight on the Music industry at the 2016 State of the Entertainment Industry Conference presented by the Hollywood Chamber of Commerce and Variety. The packed program will be held at Loews Hollywood Hotel on Wednesday, November 30th. Registration will begin at 8:30 a.m. with the sessions running from 9:15 a.m. to 1:30 p.m.

Zach Katz is the President Repertoire and Marketing at BMG US, the US operation of BMG. Starting his career in 1996 as a music attorney, Katz is responsible for a roster at BMG US which includes such star writers as Bruno Mars, will.i.am, DJ Snake, John Legend, Pitbull, Frank Ocean and Quincy Jones and recording artists such as blink-182, Janet Jackson, Alabama, Iron Maiden, Scarface and OK Go.

Prior to BMG, Katz co-founded record label Beluga Heights with his client/partner JR Rotem, where they scored multi-million album sales and tens of millions of singles sales with artists including Jason Derulo and Sean Kingston. Previously, he spent many years as a music manager and served as GM of Groove Attack USA.

BMG was named ASCAP’s Independent Publisher of the Year at the 2016 ASCAP Pop Music Awards in April. BMG US is the US operation of BMG, the new model music company created by Bertelsmann in 2008 as a direct response to the challenges of music’s digital revolution. BMG advanced to become arguably the fastest growing music company in history.

BMG’s distinctive business model brings the traditionally separate functions of music publisher and record label under one roof and offers a service-based approach which makes fairness and transparency to its artist and songwriter clients a key priority. Eight years in, BMG is already the fourth biggest company in the worldwide music publishing market and is a Top 10 player in records.

The first new global player in the recordings business in decades, BMG’s pitch is unique – a relentless focus on fairness and transparency and service to its artist and songwriter clients. BMG’s 14 offices across 12 core music markets now represent over 2.5-million songs and recordings, including the catalogues of Chrysalis, Bug, Virgin, Mute, Sanctuary, Primary Wave and Talpa Music, as well as literally thousands of artists and songwriters attracted by its fresh approach.

The conference is the pre-eminent local forum that focuses on the importance of the Entertainment Industry to California and steps that need to be taken to keep it healthy. The theme selected for the 2016 conference is “Hollywood Without Borders”. Co-chairs of this year’s conference are Sharon Keyser, Senior VP, Real Estate, Government & Community Relations for Paramount Pictures, and Doug Troy, COO/CFO of Trailer Park. Producer Vin Di Bona will once again Emcee the conference. It will feature messages from public officials and industry experts. Amy Lemisch of the California Film Commission will provide an update on the California film tax credits program. Ted Sarandos of Netflix will be recognized with the 2016 Commitment to California Award.