John Lyons of Avalon Honored with 2017 Heroes of Hollywood Award 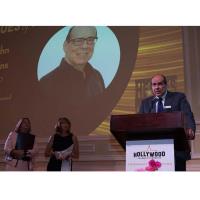 More than 400 people attended the annual fundraiser where the Heroes Of Hollywood Awards luncheon presented by the Hollywood Chamber Of Commerce Community Foundation honored John Lyons, owner of the Avalon in June at the Taglyan Cultural Complex in Hollywood. Returning for another year in their roles as Co-chairs were Carol Sarian and Cindy Braun. ABC Entertainment guru George Pennachio served as celebrity Emcee.

Our HERO John Lyons spent the better part of three decades developing and operating a diverse assortment of entertainment venues prior to his arrival in Hollywood in 2001.  Headquartered in Boston, MA, John and his brothers began the Lyons Group. Under that brand they opened 40+ venues covering the gamut from punk rock to fine dining, dance clubs to country bars, discotheques to bowling alleys. After launching the House of Blues in Cambridge, John went on the road for two years to expand the chain in such cities as New Orleans, Chicago, and Los Angeles.

While setting up the West Hollywood location in 1994, he became intrigued with Hollywood. John saw the area as a diamond in the rough that could be resuscitated with a bit of TLC. This idea percolated for a while and after a particularly brutal winter, John decided to make the leap and “go west.”  Against the advice of all of the naysayers that said that Los Angeles would not support a large venue and that Hollywood was a risky location, he took over the Palace Theater on Vine St. After a substantial investment in the building, The Spider Club was launched followed shortly by the West coast installment of Avalon.  In 2008, he opened Bardot.

As a firm believer that a business can only be as healthy as the community it serves, John became actively involved in organizations that shared his desire to make Hollywood a better place.  He has served on the boards of the Hollywood BID, Chamber of Commerce, and the Hollywood PAL. In addition to these organizations, John actively supports the LAPD/FD Memorial Foundations. John resides in Hollywood with his wife Amanda and his most ambitious undertaking to date, 9-year-old daughter Dani.