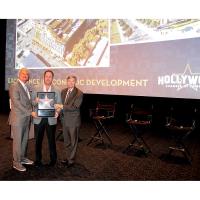 The Excellence in Economic Development Award was presented this year to Hudson Pacific Properties, Inc., (Symbol: HPP) the firm responsible for the new ICON Development, and for revitalizing the Sunset-Bronson and Sunset-Gower studio lots. Chris Barton, Executive Vice President of Development and Capital Investments for Hudson Pacific, accepted the award at the annual Summit on June 22nd at the ArcLight Hollywood Cinemas.

The Excellence in Economic Development Award honors are well-deserved. Hudson Pacific Properties has been responsible for bringing hundreds (if not thousands) of jobs to Hollywood. They have played a major role in the revitalization of Hollywood. The company recently announced that it had finalized a $200-million acquisition of the historic Hollywood Center Studios. This is the third studio acquisition in Hollywood by Hudson Pacific. Based on their track record, it is very good news for Hollywood and the entertainment industry. It is also great news for building a livable Hollywood! Hudson Pacific Properties has been great partners in our community and are bringing jobs to Hollywood to create more of a work-create-live environment.

In presenting this second Excellence in Economic Development Award, the honor acknowledges the achievements of community game changers. This year’s honoree Hudson Pacific Properties, the owner of Sunset Bronson, Sunset Gower and Susnet Las Palmas Studios here in Hollywood, are the largest, independent owner-operator of sound stages in Hollywood, with 35 sound stages totaling 1.2-million sq.ft. on 41 acres.  They recently completed ICON, a 14-story, 326,00-sq.ft. office tower and will soon complete CUE, another building on the same lot, that are both occupied by Netflix as its new Los Angeles headquarters.  This year, Hudson Pacific will break ground on EPIC, another creative office tower at the corner of Sunset and Bronson, and in April they acquired the historic Hollywood Center Studios.  They are committed to Hollywood and have invested millions of dollars in creating beautiful campuses to attract the entertainment industry back to Hollywood.

Located on a prominent four-acre site at the northeast corner of the Sunset Bronson Studios lot, ICON is a 14-story, Class A office building and the new home to Netflix’s Hollywood headquarters. ICON is situated in the heart of Hollywood, one block west of the 101 Freeway and minutes from the Hollywood/Vine LA Metro Red Line station. The vertical campus features a striking design by Gensler Architects and state-of-the-art building systems expected to achieve LEED Gold certification. In addition to unique access to a full-service production facility and studio lot, the building features 24,000-sq.ft. floor plates, 45-sq.ft. column free spans, 14-ft ceilings, floor-to-ceiling windows with panoramic views and terraced balconies on multiple floors.

The compelling ICON is one of the newest addition to Hollywood’s growing office sector. The innovative signature ICON is fully leased as Netflix has taken more than 400,000-sq.ft. on that campus. “A few years ago, we were worried that Hollywood was on the verge of losing its commercial real estate market. The residential growth has helped to bring back the office market,” said Hollywood Chamber President & CEO Leron Gubler. “It is an exciting time for Hollywood as we try to develop a well-balanced urban community.”

The Chamber’s most popular annual publication, the Hollywood Development Update for 2017, were distributed at the conference with information about 92 projects in the pipeline for Hollywood.

The Economic Development Committee of the Hollywood Chamber of Commerce serves as the forum to generate and share ideas that can further the economic development mission of the Hollywood Chamber and guide Hollywood’s growth as the most dynamic, diverse and vibrant community in the Los Angeles area. The committee brings together regional thought leaders, public policy experts, private sector leaders and government officials in an effort to advance ideas and advocate for economic development and policies that will further the growth, development and sustainability of Hollywood’s diverse communities including business, residential, visitors, education and our community serving nonprofit organizations.