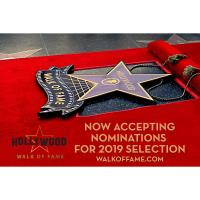 Hollywood Walk Of Fame Committee Now Accepting Walk Of Fame Nominations For Year 2019
All Nomination Forms Must Be Submitted by Tuesday, May 31, 2018 at Noon
To be Considered in June Selection Meeting for 2019

“We are constantly asked about the process. Nominating someone for a star is as simple as can be! All we ask for is a completed nomination application and a commitment to sponsor the star should their celebrity sign off in writing on the nomination and attend the event to accept the honor if selected. Anyone can nominate their favorite celebrity, including a fan,” said Ana Martinez, Producer of the Walk of Fame ceremonies. “Each year, we receive an average of 300 nominations. The Walk of Fame Committee will select an elite group of personalities to become our newest Walk of Famers and continue to help make Hollywood the most famous landmark in the world!”

The Walk of Fame categories include Motion Pictures, Television, Radio, Recording and Live Theatre/Live Performance. The Walk of Fame Committee will select approximately 20-24 names for insertion into the world-famous Walk.
Whether nominating an individual or group, the sponsor must submit a photo, a bio and the nominee’s qualifications as well as a list of contributions to the community and civic-oriented participation. A letter of agreement from the nominee or his/her management must be included with the application. Those selected for stars have a two year time frame in which to set their ceremony date. They do expire upon the two year anniversary of selection. Posthumous nominations have a five year waiting period.

The Hollywood Walk of Fame does not encourage or endorse online campaigns for fundraising for a star prior to selection. Such initiatives do not impact the selection process for a star on the Walk of Fame. The committee does not accept signatures, phone calls, e-mails, or any form of written or online petitions for a nomination. Beware of all online petitions that collect your email address to no avail. Only official Walk of Fame applications are accepted. “We encourage that you read and fully understand the nomination and selection process on our website www.walkoffame.com,” said Martinez.
New selections will be announced late June. See www.walkoffame.com for updates.
-30-