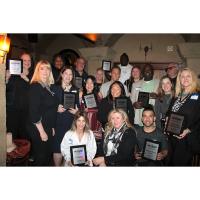 The Hollywood Chamber of Commerce held its March Business After Hours on Thursday, March 26th at Teddy’s in the historic Hollywood Roosevelt Hotel.

Since opening in 1927, The Hollywood Roosevelt has taken the spotlight as the birthplace of the Academy Awards and the once-home to Marilyn Monroe. Named after the 26th President of the United States, Theodore Roosevelt, the hotel is a legendary venue with style and service that embodies Hollywood’s Golden Age. Hidden within The Hollywood Roosevelt, Teddy’s is a secret Hollywood hotspot. Cozy and dimly lit, the venue features a DJ booth, full bar, and classic Hollywood ambiance.

The exclusive networking event offers a great opportunity for members to mingle and make new contacts with other Chamber members.

Click here to view pictures from the event on our facebook.com/HollywoodChamberCA