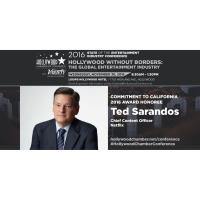 The Hollywood Chamber of Commerce announced Ted Sarandos as the recipient of its annual Commitment to California Award. Sarandos is the Chief Content Officer of Netflix. He will be receiving the award during the fifth annual State of the Entertainment Industry Conference, presented by the Hollywood Chamber of Commerce and Variety. It will be held at Loews Hollywood Hotel on Wednesday, November 30th. Registration will begin at 8:30 a.m. with the sessions running from 9:15 a.m. to 1:30 p.m.

The award recognizes a leader in the entertainment industry who has shown by their actions support for the California Film Industry. Ted Sarandos is one of Time Magazine’s 100 Most influential People of 2013, and has led content acquisition for Netflix since 2000. With more than 20 years of experience in the home entertainment business, Ted is recognized as a key innovator in the acquisition and distribution of films and television programs. From its roots as a U.S. DVD subscription rental company, Netflix is now the world’s leading Internet television network with over 65-million members in more than 50 countries and producing more than 320 hours of original content.

With the releases of "House of Cards," "Hemlock Grove," "Arrested Development," "Orange is the New Black," “Turbo F.A.S.T.,” “Derek,” and “Lilyhammer,” and more, Ted led the transformation of Netflix into an original content powerhouse that is changing the rules of how serialized television is produced, released and distributed globally. In its first two years of releasing original series, documentary films, children’s shows and comedy specials, Netflix has been recognized by the film and TV industries with 45 Emmy nominations, 15 Daytime Emmy nominations, two Oscar nominations and 10 Golden Globe nominations.

Ted has also been producer or executive producer of several award-winning and critically acclaimed documentaries and independent films, including the Emmy nominated "Outrage," and "Tony Bennett: The Music Never Ends." He is a Henry Crown Fellow at the Aspen Institute and serves on the board of Exploring The Arts, a non-profit focused on arts in schools. He also serves on the Film Advisory Board for Tribeca and Los Angeles Film Festival, is an American Cinematheque board member, an American Film Institute trustee and is an Executive Committee Member of the Academy of Television Arts & Sciences. Ted is married to U.S. Ambassador Nicole Avant (ret.) and has two children, Sarah and Tony Sarandos.

The conference is the pre-eminent local forum that focuses on the importance of the Entertainment Industry to California and steps that need to be taken to keep it healthy. The theme selected for the 2016 conference is “Hollywood Without Borders”. Co-chairs of this year’s conference are Sharon Keyser, Senior VP, Real Estate, Government & Community Relations for Paramount Pictures, and Doug Troy, COO/CFO of Trailer Park. Producer Vin Di Bona will once again Emcee the conference. It will feature messages from public officials and industry experts. Amy Lemisch of the California Film Commission will provide an update on the California film tax credits program.