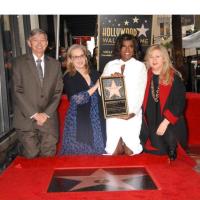 The Hollywood Chamber of Commerce honored award winning actress Viola Davis with the 2,597th star on the Hollywood Walk of Fame on Thursday, January 5, 2017. The star in the category of Motion Pictures was dedicated at 7013 Hollywood Boulevard in front of Marshalls Department Store across the street from the historic Hollywood Roosevelt Hotel.

“Viola is one of the actresses who always mesmerize fans with her talent. She is amazing and we are thrilled that she will forever grace our world famous Hollywood Walk of Fame,” stated Walk of Fame producer, Ana Martinez.

Helping Emcee and Hollywood Chamber President/CEO Leron Gubler to unveil the star was actress and Walk of Famer Meryl Streep.

Davis is a native of Central Falls, Rhode Island.She began her acting career in theater after graduating from Juilliard. This powerful performer is a critically-revered award-winning actress of film, television and theater known for her intriguingly diverse roles.

Davis is currently starring on the drama “How to Get Away with Murder,” from ABC Studios and Shondaland. In 2015, Davis received the Screen Actors Guild Award for “Outstanding Performance by a Female Actor in a Drama Series,” in addition to becoming the first African American to receive the Primetime Emmy Award for “Outstanding Lead Actress in a Drama Series.” This year, she received her second Screen Actors Guild Award and her second Emmy nomination for portraying Annalise Keating. Season 3 premiered in September.

Davis can currently be seen in “Fences” for Paramount Pictures which opened in select cities on December 16th and nationwide on Christmas Day.   The film is starring, directed and produced by Denzel Washington and is adapted from August Wilson’s play. Davis also starred with Washington in the 2010 revival of the play on Broadway. Her portrayal of Rose Maxson earned her a Tony Award, as well as the Drama Critics’ Circle Award, Outer Critics Circle Award and Drama Desk Award. “Fences” was also honored with the Tony Award for “Best Play Revival” and was the most profitable theater production of the year.

In Spring of 2017, Davis will begin production on “Widows,” directed by Steve McQueen and written by Gillian Flynn. Most recently, Davis was seen in the highly anticipated “Suicide Squad” with Will Smith, Margot Robbie and Jared Leto. In 2015, Davis starred opposite Jennifer Lopez in “Lila & Eve,” Davis also took the reins as a producer on this film, along with her husband, Julius Tennon, for their company, JuVee Productions. In Summer 2015, Davis completed production on “Custody” co-starring Catalina Sandino Moreno and Hayden Panettiere and directed by James Lapine. The film was also produced by JuVee Productions and premiered at the 2016 Tribeca Film Festival. In 2014, Davis reteamed with Tate Taylor (“The Help”) on the James Brown biopic “Get on Up.” The film starred Chadwick Boseman as the ‘Godfather of Soul’ James Brown. Davis starred as James’ mother, ‘Susie Brown.’

In 2012, Davis received an Oscar nomination for “Best Actress” for her portrayal of the heart-broken but stoic ‘Aibileen Clark’ in “The Help.” Emma Stone, Bryce Dallas Howard and Octavia Spencer also starred. The film adaptation of Kathryn Stockett’s best-selling novel,  was also nominated for an Academy Award for “Best Picture.” Davis won the Screen Actors Guild andCritics’ Choice “Best Actress” Awards for her portrayal of ‘Aibileen,’ and was also nominated for a Golden Globeand British Academy Film Award. The film won a Screen Actors Guild Award for “Outstanding Performance by a Cast in a Motion Picture” and a Critics’ Choice Awardfor “Best Acting Ensemble.”

In 2008, Davis starred in the critically revered film “Doubt” based on John Patrick Shanley’s Tony Award winning play, where she portrayed ‘Mrs. Miller,’ the mother of a young boy who piques the fascination of a Catholic priest. Davis shared the screen alongside Meryl Streep, Amy Adams and Phillip Seymour Hoffman. Davis was nominated for a Golden Globe Award, Screen Actors Guild Award and an Academy Award for “Best Supporting Actress.” The National Board of Review recognized Davis with the Breakthrough Award and she was also honored by the Santa Barbara Film Festival as a Virtuoso.

Davis and her husband founded JuVee Productions in 2012, a multi-ethnic production company committed to excellence in film, television, and theatre. As their first project, they optioned the rights to Ann Weisgarber’s 2008 bookThe Personal History of Rachel DuPree.   JuVee Productions’ other projects include the story of Harriet Tubman, which will be produced in association with HBO Films; Vee-Jay Records, a label that released the first Beatles tracks in America; and a Barbara Jordan biopic.

Davis won the Independent Spirit Award for “Best Supporting Female” in 2003 for her performance in “Antwone Fisher.” Additional film credits include: “Ender’s Game” “Blackhat,” “The Disappearance of Eleanor Rigby,” “Prisoners,” “Beautiful Creatures,” “Won’t Back Down,” “Extremely Loud & Incredibly Close,” “Knight and Day,” “Nights in Rodanthe,” “Madea Goes to Jail,” “State of Play,” “Law Abiding Citizen,” “Disturbia,” “Eat, Pray, Love,” “It’s Kind of a Funny Story,” “The Architect,” “Get Rich or Die Tryin’” and “Far From Heaven.” She worked with director Steven Soderbergh on “Solaris,” “Traffic” and “Out of Sight,” and in “Syriana,” which Soderbergh produced for director Stephen Gaghan.

In 2004, Davis starred in the stage in the Roundabout Theatre Company’s production of Lynn Nottage’s play, “Intimate Apparel,” directed by Daniel Sullivan. She garnered the highest honors for an off-Broadway play, including “Best Actress” awards from the Drama Desk, the Drama League, the Obie and the Audelco Award. Davis was nominated for the Lucille Lortel Award as well. She reprised her role at the Mark Taper Forum in Los Angeles where she was recognized with the Ovation, Los Angeles Drama Critics and the Garland Awards.

In 2001, Davis was awarded a Tony for “Best Performance by a Featured Actress in a Play” for her portrayal of ‘Tonya’ in “King Hedley II.” Davis also received a Drama Desk Award in recognition of her work.