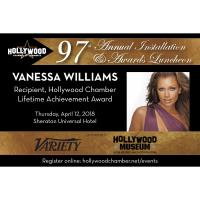 The day will begin with a reception at 11:30 a.m. at the Sheraton Universal Hotel, 333 Universal Hollywood Drive, followed by the luncheon at noon. Admission is $75 for Chamber members. Reservations can be made at www.hollywoodchamber.net/events.

Vanessa Williams is one of the most respected and multi-faceted performers in the entertainment industry today. Having sold millions of records worldwide, Vanessa has also scored numerous No. 1 and Top 10 hits on various Billboard Album and Singles charts.

Her critically-acclaimed work in film, television, recordings and the Broadway stage has been recognized by every major industry award affiliate including 4 Emmy nominations, 11 Grammy nominations, a Tony nomination, 3 SAG award nominations, 7 NAACP Image Awards and 3 Satellite Awards. Her platinum single “Colors of the Wind,” from the Disney film Pocahontas, won the Oscar, Grammy and Golden Globe for Best Original Song.

A strong advocate for equal rights, especially concerning the gay community and minorities, Williams was honored with the Human Rights Campaign “Ally for Equality” Award for her humanitarian contributions. She also achieved a career pinnacle with a star on the Hollywood Walk of Fame in 2007.

In addition, Donelle Dadigan, the President & Founder of the Hollywood Museum in the Historic Max Factor Building, will be installed as Chair of the Board to lead the Hollywood Chamber of Commerce, beginning in April.

Joining Dadigan as Chamber officers for the 2018 to 2019 year will be: Bill Roschen of Roschen Van Cleve Architects, Senior Vice Chair; Nicole Mihalka of JLL, Vice Chair; Michelle Sobrino-Stearns of Variety, Vice Chair; Brandon Mason of Avison Young, Vice Chair; Dwayne Gathers of Gathers Strategies, Treasurer; and Mark Edwards of JVS SoCal, Secretary.
​
Jeff Zarrinnam, Owner of Hollywood Hotel, will be honored as the outgoing chair of the board.