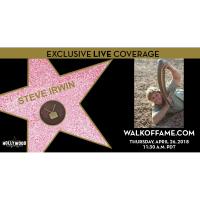 The Hollywood Chamber of Commerce proudly honored the late animal activist Steve Irwin with the 2,635th star on the Hollywood Walk of Fame today, Thursday, April 26, 2018, at 11:30 a.m. PDT. The posthumous star was dedicated in the category of Television at 6320 Hollywood Boulevard in front of the Iguana Vintage store.

“People from around the world will always remember the animal whisperer Steve Irwin. He was a joy to be around and entertained all with his love and knowledge of the animal kingdom. The Hollywood Walk of Fame is thrilled to pay tribute to this exceptional man,” stated Ana Martinez, Producer of the Walk of Fame ceremonies.

Helping Emcee Leron Gubler, President & CEO of the Hollywood Chamber of Commerce to unveil the star were Wes Mannion, Director of Australia Zoo and Wildlife Warriors. Accepting the star were Terri, Bindi and Robert Irwin. A South American Green Anaconda named Angelina was on hand for the star ceremony!

Stephen Robert Irwin was born on February 22, 1962, in Ferntree Gully is a suburb of Melbourne, Victoria, Australia. His parents moved to Beerwah, Queensland, where they opened the Beerwah Reptile and Fauna Park in 1970.

Irwin grew up loving all wildlife, especially reptiles. He caught his first venomous snake (a Common Brown) at the tender age of six and would often arrive late to school after convincing his mother to pull over so he could rescue a lizard off the road.

By the time he was nine-years-old, Irwin was helping his dad catch small problem crocodiles hanging around boat ramps by jumping on them in the water and wrestling them back into the dinghy. He always had an uncanny sixth sense when it came to wildlife and he spent his life honing that skill.

In the 1980s, Irwin spent months on end living in the most remote areas of far North Queensland catching problem crocodiles. He worked with his dog, Sui, and developed crocodile capture and management techniques that are now utilized with crocodilians around the world.

By 1980, the family wildlife park was called the Queensland Reptile and Fauna Park. This is where Irwin called home and where he worked countless hours with his mate, Wes Mannion caring for the wildlife and maintaining the grounds.

In 1991 Irwin took over managing the wildlife park. A few months later, he met Terri Raines, a visiting tourist. In June 1992, they were married in Eugene, Oregon.

Instead of a honeymoon, the couple embarked on filming a wildlife documentary with John Stainton from the Best Picture Show company. The show was so successful that it turned into a series and “The Crocodile Hunter” was born. The TV series became an internationally broadcast wildlife documentary hit which Irwin co-hosted with wife Terri.

Irwin worked tirelessly to improve and expand the wildlife park. Renaming it Australia Zoo in 1998, Irwin’s vision for the world’s best zoo was coming to fruition. In July 2006, Irwin set out his ten-year business plan for his beloved zoo. Tragically, Irwin passed two months later but he knew in his heart that his conservation work would go on with the help of his family.

On May 5th, Wildlife Warriors around the world will converge on the SLS Hotel – Beverly Hills for the Steve Irwin Gala Dinner, celebrating the life and legacy of the Crocodile Hunter.