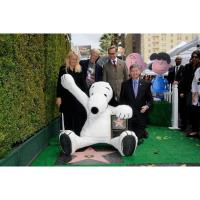 No Bones About It!
Snoopy Honored With Star On The Hollywood Walk Of Fame
Kids of all ages were thrilled to know that Snoopy’ s star next to the star of his creator Charles M. Schulz

The Hollywood Chamber of Commerce honored Snoopy with the 2,563rd star on the Hollywood Walk of Fame on Monday, November 2, 2015 at 11:30 a.m. PST. The star in the category of Motion Pictures was dedicated at 7021 Hollywood Boulevard near the corner of Hollywood Boulevard and Sycamore. The site of his star resembled the famous comic book back yard of this famous pooch!

“Kids of all ages have been in great anticipation of this star ceremony. Snoopy is one of the most popular personalities of the Peanuts characters and we are pleased to honor him with his very own star next to the great cartoonist who created him, Charles M. Schulz!” stated Ana Martinez, producer of the Walk of Fame ceremonies. “We hope that he writes about this special honor in his great American novel!”

Beloved since 1950, Snoopy is the world’s best known and accomplished beagle, the original “Joe Cool,” a world-famous novelist, and a celebrated World War I Flying Ace. As he has throughout his illustrious career, Snoopy is making history – as the first beagle to receive the coveted Walk of Fame star honor. When asked how he felt about receiving this great honor, Snoopy responded enthusiastically, “Woof!”

Snoopy has a very busy career. At last count, he has worked on 45 television specials, four motion picture films and one Saturday morning TV show. He will next be seen starring in THE PEANUTS MOVIE directed by Steve Martino. His friends, Charlie Brown, Lucy, Linus and the rest of the beloved “Peanuts” gang make their big-screen debut, like they’ve never been seen before, in state-of-the-art 3D animation. Charlie Brown, the world’s most beloved underdog, embarks upon an epic and heroic quest, while his best pal, the lovable beagle Snoopy, takes to the skies to pursue his arch-nemesis, the Red Baron. From the imagination of Charles M. Schulz and the creators of the ICE AGE films, THE PEANUTS MOVIE will prove that every underdog has his day on November 6th, 2015.

Peanuts creator Charles Schulz drew the most popular and influential comic strip of all time, which was read every day by 355 million people in 75 countries. In addition to the famous strip, Peanuts holiday television specials such as “It’s The Great Pumpkin, Charlie Brown” have won several Emmys and are among the highest rated primetime TV specials.

The Trick-or-Treat for UNICEF campaign will team with 20th Century Fox’s “The Peanuts Movie” this Halloween to help raise funds for children in need.

Snoopy, Charlie Brown and the rest of “The Peanuts Movie” characters will support the philanthropic effort, which has raised more than $175 million for UNICEF to provide children around the world with medicine, nutrition, clean water, emergency relief and education.

Snoopy has been, and remains a character everyone loves. His imagination and spark inspires laughter and thoughtfulness all over the world. Folks in every corner of the world know and love this warm puppy. He is the pet and the friend we all wish we had.