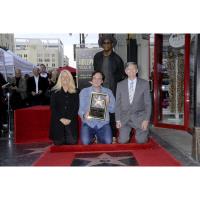 Watch LIVE as the Hollywood Chamber honors Quentin Tarantino with star on www.walkoffame.com

The Hollywood Chamber of Commerce honored Quentin Tarantino with the 2,569th star on the Hollywood Walk of Fame on Monday, December 21, 2015. The star in the category of Motion Pictures was dedicated in front of the TCL Chinese Theatre at 6927 Hollywood Boulevard. Helping Emcee and Hollywood Chamber President/CEO Leron Gubler to unveil the star will be Samuel L. Jackson.

Quentin Tarantino was born in Knoxville, Tennessee and began his film career as a video store clerk and eventually broke into the motion picture business when he sold the screenplays for “Natural Born Killers” and “True Romance”.

With his vibrant imagination and dedication to richly layered storytelling Quentin Tarantino (Writer/Director) has established himself as one of the most celebrated filmmakers of his generation.

The Weinstein Company will release Tarantino's “The Hateful Eight”, starring Samuel L. Jackson, Kurt Russell, Jennifer Jason Leigh, Walton Goggins, Tim Roth, Michael Madsen, Demian Bichir, and Bruce Dern in glorious 70mm on Christmas Day with a nationwide theatrical digital release on December 31, 2015.  In “The Hateful Eight”, six or eight or ten years after the end of the Civil War, a band of strangers who seek refuge from a blizzard in a mountainside stopover and discover that hidden allegiances and dangerous motives threaten their survival.

Tarantino wrote, directed and starred in “Reservoir Dogs”, which made an auspicious debut at the Sundance Film Festival and marked the beginning of Tarantino’s career as a filmmaker. “Reservoir Dogs” co-stars Tim Roth, Michael Madsen, Chris Penn, Steve Buscemi and Harvey Keitel.

Following the success of “Reservoir Dogs”, the screenplays that Tarantino wrote during his tenure as a video store clerk became hot properties: Tony Scott directed Christian Slater and Patricia Arquette in “True Romance”, and Robert Rodriguez directed George Clooney and Salma Hayek in “From Dusk Till Dawn”. In addition to their collaborations “From Dusk Till Dawn” and “Grindhouse”, Tarantino also joined Rodriguez as a special guest director on his hit Sin City.

Tarantino joined Rodriguez, Allison Anders and Alexandre Rockwell by directing, writing and executive producing a segment of the omnibus feature “Four Rooms”. For television, Tarantino directed the season five finale of “CSI.”  The episode, titled “Grave Danger” garnered Tarantino an Emmy nomination for Outstanding Directing for a Drama Series. Tarantino made his television directorial debut in 1995 with an episode of the long-running drama “ER.”

Tarantino’s diverse work as a producer exemplifies both his commitment to first-time filmmakers and his support for his experienced peers and colleagues. Tarantino served as an executive producer on Eli Roth’s “Hostel”, and “Hostel II”, Roger Avary’s “Killing Zoe”, and Katrina Bronson’s “Daltry Calhoun”, and Robert Rodriguez’s “From Dusk Till Dawn”.

The longtime fan of Asian cinema presented Yuen Wo Ping’s “Iron Monkey” to American audiences in 2001 and Zhang Yimou’s “Hero” in 2004.

Tarantino’s commitment to film preservation is best exemplified by the purchase and refurbishment of the New Beverly Cinema located in Los Angeles. Regarded as an institution among cinephiles the New Beverly showcases 35mm prints of classic films on nightly double features curated by Tarantino. He is also an ardent supporter of The Sundance Institute, most recently serving as a creative advisor for the 2014 January Screenwriters Lab and recently began working with The Make-A-Wish Foundation.