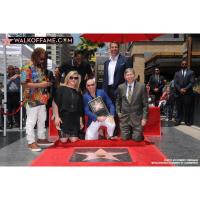 Watch star ceremony as the Hollywood Chamber honors Pitbull with Walk of Fame Star on www.walkoffame.com

The Hollywood Chamber of Commerce proudly honored Pitbull with the 2,584th star on the Hollywood Walk of Fame on Friday, July 15, 2016 at 11:30 a.m. PDT. The star in the category of Recording was dedicated at 6201 Hollywood Boulevard in front of Eastown located in Celia Cruz Square. Helping Emcee and Hollywood Chamber President/CEO Leron Gubler to unveil the star were motivational speaker Tony Robbins and music mogul Luther Campbell. “The world is fascinated by Pitbull’s story and his remarkable talent. The Hollywood community welcomes him with open arms and applauds him for his work by placing him on one of the world’s most famous landmarks, the Hollywood Walk of Fame,” stated Ana Martinez, Producer of the Walk of Fame ceremonies. A special surprise was given to Pitbull after the speakers spoke about their friend. Leron Gubler, President of the Hollywood Chamber of Commerce was asked by the estate of the late singer Celia Cruz to present Pitbull with a beautiful shoe encased in a lucite box that once belonged to the legendary Walk of Famer. Armando was very touched by the gesture.

From landing No. 1 hits in over 15 countries, 9-billion YouTube/VEVO views, 70-million single sales, and 6-million album sales, Pitbull is unstoppable. His relentless work ethic transformed him into a Grammy-winning international superstar, visionary entrepreneur, fashionista, and successful actor. His social media presence speaks to nearly 90-million people daily. Also known as “Mr. 305” and “Mr. Worldwide,” he is as ubiquitous as Google or Microsoft. Pitbull is releasing his tenth full-length album, 2016’s Climate Change [Mr. 305, Polo Grounds, RCA Records] this fall and is currently on The Bad Man Tour with Prince Royce and special guest Farruko in Fresno, California.

Upon graduating high school, he turned all of his attention to music with a series of underground mixtapes. He released his full-length debut, M.I.A.M.I in 2004, and followed it with the successful El Mariel in 2006 and The Boatlift in 2007. In tribute to his father, Pitbull delivered his first Spanish-language album Armando in 2010. In 2011 Planet Pit, debuted at No. 7 on the Billboard Top 200 and spawned one of the best-selling singles of all-time “Give Me Everything.” The anthem would be his first work to top Billboard’s Hot 100 and go RIAA quintuple-platinum, selling over 8-million units globally. Pitbull solidified himself as a superstar entertainer, selling out arenas and stadiums all around the world. His greatest hits include such songs as “Timber” (No. 1 on Billboard’s Hot 100 for three weeks straight, six-times platinum, and accumulated global sales surpassing $8-million as the sixth best-selling song of the year; “Fireball” and “Time of Our Lives” and “Freedom.” His second Spanish-language album, Dale, buoyed some of his biggest international songs, including the Gold-certified, “Piensas” and “El Taxi” and the platinum “Como Yo Le Doy,” VEVO-certified for views in excess of 100-million.

Pitbull hosted the American Music Awards two years in a row in 2013 and 2014. He received the honor of writing the 2014 FIFA World Cup official song and delivered a show-stopping performance alongside Jennifer Lopez and Claudia Leitte in São Paulo, Brazil. The show was seen worldwide during the opening ceremony.

Following his first Las Vegas residency, “Time of Our Lives” at the AXIS at Planet Hollywood Resort & Casino, the casino beckoned him to return for a second run in 2016.

Outside of entertainment, Pitbull is making history as an entrepreneur. Whether it’s his Voli Vodka, fragrance line “Pitbull,” or the high-profile partnerships with brands from Bud Light, Dr. Pepper and Dodge, his influence has catapulted. Norwegian Cruise Line handpicked him as Norwegian Escape’s Godfather with the duty of christening the ship with a special performance. He holds equity in Miami Grill and orchestrated a strategic alliance with Playboy Enterprises. He has partnered with Endemol North America, housing his production company, “Honey I’m Home.” His Sirius XM Radio station, Pitbull’s Globalization Radio, cemented itself as the platform’s fastest-growing station following its 2015 launch.

His music has appeared in Men In Black III and The Penguins of Madagascar, and he even had a starring role in the animated film Epic.
Continuously giving back and cultivating success among the next generation, Pitbull serves as the brand ambassador for Sports, Leadership and Management Academy (SLAM!)—part of the Academica charter school network with locations in Little Havana, Miami and Las Vegas, Nevada.
★★★

ABOUT THE HOLLYWOOD WALK OF FAME www.WalkOfFame.com
The Hollywood Walk of Fame is an internationally-recognized Hollywood icon. With approximately 24 star ceremonies annually broadcast around the world, the constant reinforcement provided to the public has made the Walk of Fame a top visitor attraction. The Hollywood Chamber of Commerce continues to add stars on the Walk of Fame as the representative of the City of Los Angeles. The Walk of Fame is a tribute to all of those who worked diligently to develop the concept and to maintain this world-class tourist attraction. The Walk of Fame is open to the public. No paid admission or assigned seating at star ceremonies. It is understood that the cost of installing a star on the Walk of Fame upon approval is $30,000 and the sponsor of the nominee accepts the responsibility for arranging for payment to the Hollywood Historic Trust, a 501(c)3 charitable foundation. The funds are used to pay for the creation/installation of the star and ceremony, as well as maintenance of the Walk of Fame. Download the official app for iPhones and Android devices at http://officialhollywoodwalkoffameapp.com