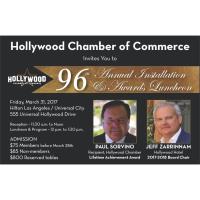 Actor Paul Sorvino will be presented with a Lifetime Achievement Award at the Chamber’s 96th annual Installation & Lifetime Achievement Awards Luncheon, on Friday, March 31st. The day will begin with a reception at 11:30 a.m. at the Universal Hilton Hotel, 555 Universal Hollywood Drive, followed by the luncheon at noon. Admission is $75 for Chamber members, with reserved tables of 10 at $800. Reservations can be made by going to Chamber Events at www.hollywoodchamber.net/events.

Brooklyn-born actor Paul Sorvino began his career as a 16-year-old singer at a Catskills resort dreaming of becoming an opera singer. And it was no pipe dream. He had studied singing for years and, to this day, has a beautiful tenor voice. But rent and real life led him into a variety of odd jobs and a stint in the Army.

His singing hopes somewhat stifled by asthma, he redirected his career into what promised to be a more promising field—acting. Years of acting and vocal lessons were largely supported through scholarships. After studying dramatic arts under the tutelage of renowned acting teacher Sanford Meisner at the prestigious American Musical and Dramatic Academy in New York City, Sorvino made his Broadway debut at 25 acting and singing in the original 1964 production of the musical “Bajour.” Over the next three years, Sorvino worked a variety of jobs as salesman, chauffeur, etc. while gaining prominence as an advertising writer/creative director and pursuing his acting career. He made his film debut in Carl Reiner’s 1970 comedy “Going Ape” and began a career solely dedicated to acting and occasional singing.

At 40, the tenor made his lifelong dream come true with his operatic debut in “Die Fledermaus,” selling out six performances at the Seattle Opera. The impresario Glynn Ross told the press that Sorvino had “one of the voices of the century!” The reviews included “he has an astonishing high C.” In opera, he would go on to sing the lead in “The Most Happy Fella” in 2006 at The New York City Opera at Lincoln Center and sold out 15 critically-acclaimed performances.

​Sorvino has appeared in more than 180 films, and a variety of television shows. An accomplished stage actor, he won six awards for his performance in the Broadway production of the dark comedy “That Championship Season”—including a Drama Desk Award and the New York Drama Critics Award for Best Actor in 1972, and was nominated for a Tony Award in 1973. He reprised the role in the 1981 movie version, and directed and starred in the Showtime version of “That Championship Season” in 1999. His most recent role in the soon-to-be released film "Once Upon a Time In Queens" won him the Best Actor award at the Florida film festival.

​Sorvino has also directed on Broadway, “Wheelbarrow Closers,” and off Broadway’s “Marlon Brando Sat Right Here,” as well the film “The Trouble With Cali.” In 1987, Sorvino founded The American Stage Company on the campus of Fairleigh Dickinson University and was its artistic director for three years.

On the big screen, Sorvino is best known for his portrayal of tough guys and authority figures, in such standout performances as Paul Cicero in Martin Scorsese’s 1990 film “Goodfellas” and stressed-out police chief Capt. Edelson in William Friedkin’s 1980 drama “Cruising.” His other noteworthy credits include the portrayal of Henry Kissinger in Oliver Stone’s 1995 “Nixon,” and as Fulgencio Capulet in Baz Luhrmann’s 1996 Shakespearean update “Romeo + Juliet” (1996).

On television, Sorvino starred as detective Phil Cerreta on “Law & Order” and Al Miller on the sitcom “Still Standing.” Among his other starring roles on TV are Frank DeLucca in “That’s Life” and Detective Ike Porter in “The Oldest Rookie.”

Early on, Sorvino suffered from severe asthma, but as an adult, he created and mastered breathing techniques which helped control his attacks. He wrote the 1985 best-selling book “How to Become a Former Asthmatic" and founded the Sorvino Asthma Foundation to educate the public about asthma and techniques for managing the illness. He has been honored twice by the Pope for his work with asthmatics as well as by the American Medical Association.

Sir Paul Sorvino is a Knight of the Great Cross in the order of The Carinzia, founded by Saint George in the third century for the protection of the Pope (Cavaliere Di Gran Croce); and a Knight of the Italian Republic. His family is noble, its coat of arms dating back to the twelfth century.
An actor, director, best-selling author, screenwriter, professional bronze sculptor, pianist, business man, operatic tenor and passionate cook, Sorvino still returns occasionally to his original dream and headlines his own concerts. He lives in New York and Los Angeles with his wife, Emmy award winner Dee Dee Sorvino. He is the father of son Michael, daughters Amanda and Academy Award winner Mira Sorvino.

The annual event celebrates the passing of the gavel at the Hollywood Chamber. Jeff Zarrinnam, the President & CEO of the Hollywood Hotel, will be installed as Chair of the Board, along with other Chamber officers and directors.

​Zarrannam has a long association with Hollywood and the Chamber of Commerce, since he first purchased a hotel on Vermont Avenue. For many years, he chaired the Chamber’s East Hollywood Committee. He was also the founder of the East Hollywood Business Improvement District. He is currently leading the charge to create two additional BIDs in the Hollywood-Western area and a “Route 66” BID along Santa Monica Blvd. between Vermont Ave. and Vine Street. Zarrinnam has been a Chamber Board member since 2012. In addition to chairing the East Hollywood Committee, he has served as Chamber Treasurer and is raising the funds for a state-of-the art board room table.

Joining Zarrinnam as Chamber officers for the 2017 to 2018 year will be: Donelle Dadigan of the Hollywood Museum in the Max Factor Building, senior vice chair; Bill Roschen of Roschen Van Cleve Architects, vice chair; Nicole Mihalka of JLL, vice chair; Michelle Sobrino of Variety, vice chair; Carole Sarian of The CrisCom Company, secretary; and Dwayne Gathers of Gathers Strategies, treasurer. Dr. Fariba Kalantari, DDS, of Famous Hollywood Dental Care, will be honored as the outgoing chair of the board.

In addition, several new board members will be sworn in for the first time, including: Andrea Ceragioli of Paramount Pictures, Lupita Sanchez-Cornejo of AT&T, Mark Edwards, a public affairs specialist, Matt Fritch of Andrews International, and Jerry Neuman of Liner LLP.
Three directors who will be stepping down from the board will also be honored. They include Michael Gargano of Argent Ventures, Dr. Fariba Kalantari, and Stan Savage of A.F. Gilmore Co.