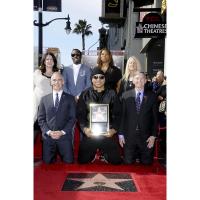 Watch us as the Hollywood Chamber honors LL Cool J exclusively on www.walkoffame.com.

The Hollywood Chamber of Commerce honors LL COOL J with the 2,571st star on the Hollywood Walk of Fame on January 21, 2016 at 11:30 a.m. PST. The star in the category of Recording was dedicated at 6901 Hollywood Boulevard in front of Hollywood’s Hard Rock Cafe. “LL COOL J is one of the most popular recording artists. He has a huge following and we are proud to honor him on the Walk of Fame.” stated Ana Martinez, Producer of the Walk of Fame ceremonies.

Celebrating 30 years since he first burst onto the scene, LL COOL J continues his vibrant, trailblazing career. LL COOL J began in the nascent, burgeoning rap and hip hop scene of the 80s, which developed into the musical and cultural phenomenon that is today’s hip hop. All the while, LL COOL J has remained a musical and cultural force, a living icon and a significant, relevant artist still churning out the hits.

First introduced to the world in 1984 as a Def Jam Records flagship artist, LL is the first rap artist to amass ten consecutive platinum-plus selling albums, in addition to 2004’s “THE DEFINITION” and 2006’s “TODD SMITH” which both went Gold.  The multi-platinum artist and two-time Rock and Roll Hall of Fame nominee is currently tied for third place for most Billboard chart debuts by a rapper. In 2008, LL released his critically acclaimed album “EXIT 13,” his appropriately titled 13th and last album for the only label he has called home - Def Jam Recordings. USA Today put it best when they said, “He may be hitting the Exit, but he is not easing up on the gas.” Continuing his musical expedition three decades after he first released music, LL most recently released his critically-acclaimed 14th studio album, “AUTHENTIC.”With this album, the multi-platinum artist returned to the studio and kicked the volume up to create a powerful album that came from his true passion for music and would speak to his fans. LL scored his 13th Top-10 Album on the Billboard R&B/Hip-Hop Chart with AUTHENTIC.

As an actor, LL COOL J has successfully transitioned to one of the consistently highest rated shows on television. He currently stars in the CBS hit primetime drama series, “NCIS: LOS ANGELES,” which is in its seventh season. Lauded as one of the most successful show launches ever, and sold into syndication after only seven episodes, his performance on the show has garnered him a NAACP Image Award four years in a row, from 2011 to 2014, for his role of ‘Special Agent Sam Hanna.’ The show is licensed in more than 200 territories around the world and translated or dubbed into dozens of languages. He previously won an NAACP Image Award for “Outstanding Male Artist” in 2003 and hosted the show in 2007.

Previously, LL had a dramatic and critically acclaimed performance on the second season premiere of FOX’s hit drama “House.” He also guest starred on the NBC comedy “30 Rock” in a memorable performance as hip hop mogul ‘Ridiculous’.

LL can currently be seen hosting and producing the Jimmy Fallon-executive produced new show Lip Sync Battle on Spike TV, which premiered in April 2015 as Spike TV’s most-watched original program ever. The series was renewed for a second season just weeks after its premiere and returned on January 7, 2016.

LL has hosted the GRAMMY® Awards for the past four years in a row, for which he has earned rave reviews. He returns as the host of the 2016 Awards on February 15, 2016 on CBS and has also hosted and produced the GRAMMY® Nominations Concert Live Special for the past seven years and has also been a presenter at the Emmy®, Golden Globe®, and SAG Awards.

Over the years, LL has appeared in more than 30 films and starred opposite acclaimed actors such as Samuel L. Jackson and Colin Farrell in Sony Pictures blockbuster “S.W.A.T.;” Al Pacino, Jamie Foxx and Cameron Diaz in Oliver Stone’s “Any Given Sunday;” and Gabrielle Union in Focus Features’ “Deliver Us from Eva.” Other film credits include “Rollerball,” “Charlie’s Angels,” “Kingdom Come,” “In Too Deep,” “Toys,” “Slow Burn” with Ray Liotta and “Eddison” with Morgan Freeman and Kevin Spacey. He also received a Blockbuster Award for best comedic performance as the ‘Chef’ in Renny Harlin’s blockbuster action film “Deep Blue Sea.” He also starred in Paramount Pictures’ “Last Holiday,” opposite Queen Latifah, which was lauded by fans and critics alike and proved to be a box office draw. He was most recently seen starring opposite Academy Award®-winner Robert De Niro in “Grudge Match.”

LL has always been an avid philanthropist involved in numerous causes including literacy for kids as well as music and arts programs in schools. Celebrating its 12th Anniversary this year, his charity “Jump & Ball” – which takes place every August in his hometown of Queens, New York – aims to give back to his local community by offering a five-week athletic and team building program dedicated to bringing wholesome fun to young people.