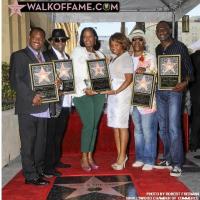 Watch LIVE as the Hollywood Chamber honored Kool & The Gang with star on the Walk of Fame.

The Hollywood Chamber of Commerce honored Kool & The Gang: Robert “Kool” Bell, Ronald Khalis Bell Dennis “DT” Thomas and George Brown with the 2,560th star on the Hollywood Walk of Fame on Thursday, October 8, 2015. The star in the category of recording was dedicated at 7065 Hollywood Boulevard next to the stars of such musicians as Dizzy Gillespie, Ray Parker Jr., The Funk Brothers, Herbie Hancock, John Denver and many others.

“Kool & the Gang and their signature sounds will bring back great memories to music lovers everywhere!” stated Ana Martinez, Producer of the Walk of Fame ceremonies. “Their music career has been a part of the lives of many generations everywhere and fans will be singing and dancing along with Kool & The Gang’s music for many, many more years.”

Throughout the seventies, this blend produced a string of hits including “Jungle Boogie,” “Hollywood Swinging,” “Funky Stuff,” and “Summer Madness”. In 1979, the group entered the pop market by incorporating the smooth sounds of vocalist James “JT” Taylor along with their infectious formula for making hits.

The famous American disc jockey Casey Kasem named Kool & the Gang the band of the eighties noting the band’s steady stream of hits during the decade. Hit songs such as “Ladies Night,” “Get Down on It,” “Joanna,” and the theme song to parties worldwide, “Celebration,” solidified Kool & the Gang’s musical legacy.

With the explosion of hip-hop in the ’90s, Kool & the Gang’s incredible and widely-sampled catalog of grooves made them DJ favorites, solidifying their place as the most sampled band in the genre – but the band’s drum beats, bass, guitar and signature horn lines found their way outside hip-hop as well and have laced the tracks of numerous chart-topping artists including the Beastie Boys,

Kool & the Gang has had their music featured on the soundtracks of such movies as Rocky, Saturday Night Fever, Pulp Fiction, Wreck-It Ralph among countless others. In addition, the band has continued to tour the world, appearing with artists such as Kid Rock, Dave Matthews Band, Elton John, The Roots, and a 50-city tour with Van Halen.

Kool & The Gang are very involved with philanthropy and have worked with such organizations as Boys and Girls Club of America, Children’s Miracle Network, St. Jude Children’s Hospital, Susan G. Komen Foundation, United Negro College Fund and much more.

On October 22, 2015, Kool & the Gang will receive a nod from their home state and be inducted into the New Jersey Hall of Fame. In the same month, and, in the town they sing about in one of their earliest hits, “Hollywood Swinging,” Kool & the Gang will take their place as American musical icons with a star on the Hollywood Walk of Fame.

WHAT:       Dedication of the 2,560th star on the Walk of Fame
in the category of RECORDING

WHERE:    7065 Hollywood Boulevard
corner of Hollywood and Sycamore

Event will be live-streamed exclusively on www.walkoffame.com