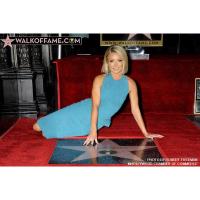 The The Hollywood Chamber of Commerce is proud to announce that television personality Kelly Ripa was honored today with the 2,561st star on the Hollywood Walk of Fame on Monday, October 12, 2015. The star in the category of Television was dedicated at 6834 Hollywood Boulevard in front of The El Capitan Theatre. “We are thrilled to add Kelly Ripa to our Walk of Fame,” said Ana Martinez, Producer of the Walk of Fame. “Kelly Ripa has won the hearts of people on the small screen across the nation, and we welcome her to our Walk of Fame family with this well-deserved star.”
Helping emcee and Hollywood Chamber President/CEO Leron Gubler to unveil the star were Walk of Famer and television host Jimmy Kimmel and actor/comedian Joel McHale.
Watch the star ceremony as it was streamed live exclusively on www.walkoffame.com

As an actress, Ripa recently received rave reviews for her guest-starring role on an episode of the hit comedy “Broad City.”  In 2003, she ventured into primetime on “Hope & Faith,” starring with Faith Ford in the half-hour sitcom which ran for three seasons on ABC. In 2002, Ripa concluded a 12-year stint as Hayley Vaughan on ABC’s “All My Children.” She won three Soap Opera Digest Awards two for “Outstanding Younger Lead Actress and one for “Hottest Romance,” which she shared with her real-life husband and co-star, actor Mark Consuelos. Ripa also received three Daytime Emmy nominations for “All My Children,” two for “Outstanding Supporting Actress in a Drama Series” and one for “Outstanding Younger Actress in a Drama Series.”

Ripa had a recurring role on the hit NBC series “Ed,” and appeared in the telefilm “It’s a Very Merry Muppet Christmas Movie.” She won acclaim for her turn in hosting “Saturday Night Live.” She voiced guest appearances on the popular animated series “Kim Possible” and “Duck Dodgers.” Ripa hosted the “50 Funniest Women Alive” special on the Oxygen network in 2007, and the TV Land Awards in 2007 and 2012. Ripa also served as the host of the annual ABC “Walt Disney World Christmas Day Parade” for nine years, receiving a 2006 Daytime Emmy Award for “Outstanding Special Class Special,” and nominations in 2007, 2008 and 2009.

Althoughbest known for her television work, Ripa has several feature films to her credit. Ripa won the “Best Actress award” at the New York International Independent Film and Video Festival for her work in “The Stand-In.” in 1999. She appeared in the acclaimed Miramax feature “Marvin’s Room” in 1996.She also was a part of the voice cast of the computer-generated animated feature “Fly Me to the Moon.”

Ripa and Consuelos started a NY-based company called Milojo Productions in 2007. The company first produced the Emmy-nominated feature documentary “The Streak” for ESPN, which premiered at the Tribeca Film Festival. Since then, Milojo has been involved in such projects as “Masters of Reception”, “Homemade Millionaire”, “Off the Rez”, “Dirty Soap”, “Cheer”, as well as election specials on LOGO with Wanda Sykes, and more. Their latest series “Secret Guide to Fabulous” is in its second season on LOGO. They have partnered with several successful comedy writers and sold scripted projects to ABC and ABC FAMILY.  Milojo also has a strong presence in the digital space with such web series as “Unstoppable Moms,” “La Familia De Hoy”, “Cheerleaders NJ,” and more.

In May 2015, Kelly was honored with GLAAD’s prestigious “Excellence in Media Award” for her significant impact in the promotion of equality and her devotion to driving acceptance forward.