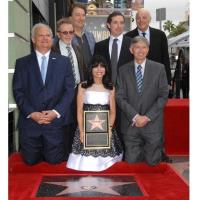 The Hollywood Chamber of Commerce honored the late composer Jerry Goldsmith with the 2,611th star posthumously on the Hollywood Walk of Fame on Tuesday, May 9, 2017 at 11:30 a.m. PDT. Goldsmith’s star was dedicated in the category of Recording at 6752 Hollywood Boulevard in front of the Musicians Institute.

Helping Emcee and Hollywood Chamber President/CEO Leron Gubler to unveil the star were Carol Goldsmith, wife of Jerry Goldsmith, and their son Aaron Goldsmith who celebrates his birthday on the same day along with guest speakers David Newman, Charles (Charlie) Fox and Paul Williams.

Oscar and Emmy winning composer Jerry Goldsmith was considered one of Hollywood’s most respected and admired creators of music for motion pictures and television. The composer of such classic scores as Chinatown, Patton, Planet of the Apes, The Sand Pebbles, A Patch of Blue, Poltergeist, Basic Instinct, Papillon, Rudy, Gremlins, Mulan, L.A. Confidential.  Goldsmith was sought-after by filmmakers, acclaimed by critics, and adored by the Hollywood music community.

He received a total of 18 Academy Award nominations, and won the Oscar in 1976 for Best Music, Original Score for his powerful orchestral and choral score forThe Omen. Two of the American Film Institute’s top 25 film scores of all time are by Goldsmith: Chinatown and Planet of the Apes.

Goldsmith was nominated seven times for an Emmy and won five Emmys for his television music, including the landmark miniseries QB VII (1975) and Masada (1981), the TV-moviesThe Red Pony (1973) and Babe (1975) and the theme for Star Trek: Voyager (1995). He also received nine Golden Globe nominations for his film scores and seven Grammy nominations for the soundtracks of his various TV and movie scores.

Goldsmith’s music is played virtually every hour of every day around the world. This is in part due to his many contributions to big and small screen incarnations of the legendary Star Trek. He scored five of the movies for the franchise, and his heraldic theme for Star Trek: The Motion Picture (1979) became the well-known signature for the long running TV series, Star Trek: The Next Generation.

During his career which spanned more than 50 years, Goldsmith composed the music for nearly 200 films, over a dozen iconic TV themes, and another 20 TV movies and miniseries. No composer was more respected by fellow practitioners of the craft as much as Goldsmith was for his unerring dramatic instincts and his innovative and even groundbreaking application of many different musical sounds and styles.

Goldsmith was born February 10, 1929 in Los Angeles, California. Classically trained, he studied piano and composition from a young age and was, from the time he was a teenager, determined to write music for movies. After studying at both USC and Los Angeles City College, he went to work at CBS, which employed him as a composer for radio and TV throughout the 1950s. He wrote his first score for a feature length film, “Black Patch,” in 1957. However,he continued to work in TV through the 1960s and early 1970s, and composed scores and familiar themes including Dr. Kildare, The Man From U.N.C.L.E., Hollywood Television Theater (PBS) andThe Waltons, as well as scoring episodes of classic series including The Twilight Zone and Gunsmoke.

In addition to his busy film and TV schedule, Goldsmith also composed for concert halls. His symphonic works include a cantata, Christus Apollo (1969)with words by Ray Bradbury, narrated by Charlton Heston and later by Sir Anthony Hopkins; Music for Orchestra (1971), commissioned by the St. Louis Symphony and Fireworks:A Celebration of Los Angeles (1999), commissioned by the Los Angeles Philharmonic. Following the attack of9/11, Goldsmith composed an in memoriam. The elegy, September 11, 2001, which was performed at the Hollywood Bowl days after the tragedy.

Notably, in 1998, he was commissioned by the Academy of Motion Picture Arts and Sciences to create an anthem for its annual awards ceremony. Goldsmith’s Fanfare for Oscar debuted at the 70th annual Academy Awards and is still being played every year during Oscar telecasts.

Goldsmith received many honors during his lifetime, including Variety's first American Music Legend Award (1995); an honorary doctorate from Boston’s Berklee College of Music (1990); lifetime achievement awards from the American Society of Music Arrangers and Composers (ASMAC 1990), and the Society for the Preservation of Film Music (1993); two governors’ awards from the National Academy of Recording Arts and Sciences (NARAS 1994, 1999); and an honorary membership in London’s Royal Academy of Music (2003). In addition to these accolades, Goldsmith is immortalized with astatuette in his likeness awarded at Spain’s International Film Music Festival. Each year for the past decade, the festival’s highest honor, “the Jerry” is awarded to an individual for excellence in the art of film music.

Giving back to the community that nurtured him and launched his career, Goldsmith began teaching in the 1990s: as the instructor of the Scoring for Motion Pictures and Television course at the University of Southern California, and then also as a Regents Lecturer in the Department of Music at the University of California at Los Angeles. He became a Visiting Professor at UCLA, teaching a yearly composition class. Additionally, in a mentoring capacity, he conducted the Young Musicians Foundation Orchestra, the Henry Mancini Institute Orchestra, and the Disney Young Musicians Symphony Orchestra.

In the days following his death in 2004, the beloved composer was eulogized on the floor of the U.S. House of Representatives with the following tribute: “Jerry Goldsmith leaves behind a distinguished repertoire of outstanding and memorable film scores and television themes that are as recognizable as they are innovative.” “His versatility and genius” were cited and Jerry Goldsmith was declared a national treasure!