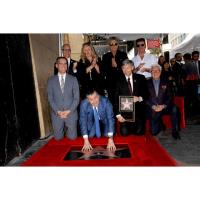 Watch us LIVE as the Hollywood Chamber honors Haim Saban exclusively on www.walkoffame.com

The Hollywood Chamber of Commerce honored iconic producer and Power Rangers creator, Haim Saban with the 2,605th star on the Hollywood Walk of Fame today, on Wednesday, March 22nd, 2017 at 11:30 a.m. PDT. The star in the category of Television was dedicated at 6712 Hollywood Boulevard in front of the historic Egyptian Theatre. Helping Emcee and Hollywood Chamber President/CEO Leron Gubler to unveil the star were Mayor Eric Garcetti, producer and songwriter, David Foster and producer and TV personality, Simon Cowell.

Haim Saban is the creator and producer of the Power Rangers™, which debuted on American television in 1993. Two decades later, the series is still on air and currently in its 24th season domestically, where it airs on Nickelodeon and also airs globally, making it one of the longest running and most-watched kids actions series in television history. It is also one of the top-selling boys action toy products in the United States.

A native of Alexandria, Egypt, Saban emigrated to Israel at the age of 12, attending agricultural school and serving in the Israeli Defense Force. While in Israel, Saban built the country’s premier tour promotion business. In 1975, the Yom Kippur War brought about his relocation to France. There, he established an independent record company which soon catapulted to the top of the European labels industry, selling more than 18-million records over a period of eight years.

Looking to build on his European music industry success, Saban next moved to Los Angeles in 1983, where he launched a chain of recording studios that rapidly became the top supplier of music for television. He would venture into television production in 1988, forming Saban Entertainment, an international television, production, distribution and merchandising company. The company produced several major hits, including The X-Men™ and numerous other shows and products developed around Marvel Comics characters.

The Saban Family is on BusinessWeek’s list of the 50 most generous philanthropists in the U.S. His fortune also ranks among the world’s top 200 in Forbes Magazine. Saban and his wife Cheryl started the Saban Family Foundation in 1999, which supports medical, children’s and education programs, including the Children’s Hospital of Los Angeles, Soroka Children’s Hospital in Israel, the John Wayne Cancer Institute, the Motion Picture and Television Fund, the Friends of the Israel Defense Forces, American Israel Education Foundation, William Jefferson Clinton Foundation, and the United Friends of the Children. In 2002, Saban founded the Saban Center for Middle East Policy at the Brookings Institution and he currently chairs its International Advisory Council.