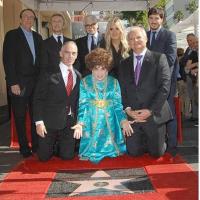 Watch as the Hollywood Chamber honors Gina Lollobrigida on www.walkoffame.com

The Hollywood Chamber of Commerce proudly honored iconic Italian actress Gina Lollobrigida with the 2,628th star on the Hollywood Walk of Fame today, February 1, 2018 at 11:30 a.m. PST. The star was dedicated in the category of Motion Pictures at 6361 Hollywood Boulevard on Hollywood’s birthday!

“Gina Lollobrigida is one of the most iconic actresses in the world,” stated Ana Martinez, Producer of the Walk of Fame ceremonies. “The dazzling multi-faceted Italian legend is a bright addition to our family of stars on the Walk of Fame.”

Helping Emcee Jeff Zarrinnam, Hollywood Chamber Chairman of the Board to unveil the star were actress Tiziana Rocca, Steven Gaydos, Consul General of Italy Antonio Verde and Roberto Stabile from the Office of the Minister of Italian Culture.

Lollobrigida also was honored by The Festival Filming On Italy, directed by Tiziana Rocca and the Italian Cultural Institute in Los Angeles, directed by Valeria Rumori, which will dedicate an entire day to celebrate Gina Lollobrigida’s career with the screening of two of her most famous films.  She will be honored for her career with the Filming On Italy Life Achievement Award which will be presented by actor Danny Huston. The event will be held at the Italian Cultural Institute at 6 p.m.

Born Luigina Lollobrigida in Subiaco, Italy, the large brown eyed child who experienced hunger and war at a very young age grew to become a young brunette with a seductive deep voice and a screen legend!

In her youth, Lollobrigida did some modelling and participated successfully in several beauty contests. At around this time, she began appearing in Italian films in minor roles.

In 1945, at age 18, she played a part in the comedy Santarellina by Eduardo Scarpetta at the Teatro della Concordia of Monte Castello di Vibio.

In 1947, Lollobrigida entered the Miss Italia pageant and came in third place and gained national exposure.

In 1950, Howard Hughes invited Lollobrigida to work in Hollywood, but she refused and preferring to remain in Europe. This decision prevented her from working in American movies filmed in the U.S. until 1959, though not from working in American productions shot in Europe. Her performance in “Bread, Love and Dreams” (Pane, amore e fantasia, 1953) led to her receiving a BAFTA nomination, and won a Nastro d’Argento award. Lollobrigida also appeared in “The Wayward Wife” (1953) and in “Woman of Rome” (1954). These were three of her most renowned Italian films, but she worked also in the French industry on such films as “Fearless Little Soldier” (Fanfan la Tulipe, 1952), Beauties of the Night (Les Belles de nuit, 1952) and “Le Grand Jeu” (1954).

Lollobrigida’s first widely-seen English language film was “Beat the Devil” (1953), which was shot in Italy. Directed by John Huston, she played the wife of Humphrey Bogart, with Jennifer Jones as her rival. She then took part in the Italian-American production “Crossed Swords” (1954), co-starring with Errol Flynn. Her appearance in “The World’s Most Beautiful Woman” (also known as Beautiful But Dangerous, 1955) led to her receiving the first David di Donatello for Best Actress award; in this film she interpreted the Italian soprano Lina Cavalieri, singing some arias from Tosca with her own voice. Lollobrigida had the principal female lead in the circus drama “Trapeze” (1956) directed by Carol Reed co-starring with Burt Lancaster and Tony Curtis. In “The Hunchback of Notre Dame (1956) directed by Jean Delannoy, she appeared as Esmeralda with Anthony Quinn as Quasimodo.

In 1959, she appeared in the French movie “The Law,” alongside Yves Montand and Marcello Mastroianni. She then co-starred with Frank Sinatra in “Never So Few” (1959), and with Yul Brynner in “Solomon and Sheba” (1959).

In the romantic comedy “Come September” (1961), Lollobrigida had a leading role along with Rock Hudson, for which she won a Golden Globe Award. She appeared, also in 1961, with Ernest Borgnine and Anthony Franciosa in the drama “Go Naked in the World.”

Lollobrigida worked again with director Jean Delannoy in “Venere Imperiale” (1962). She co-starred with Stephen Boyd  and received Nastro d’Argento and David di Donatello awards. She co-starred with Sean Connery in the thriller “Woman of Straw” (1964), with Rock Hudson again in “Strange Bedfellows” (1965) and appeared with Alec Guinness in “Hotel Paradiso” (1966).

She starred in “Buona Sera, Mrs. Campbell” (1968) with Shelley Winters, Phil Silvers, Peter Lawford and Telly Savalas. For this role, she was nominated for a Golden Globe Award and won a third David di Donatello award. Lollobrigida co-starred with Bob Hope in the comedy “The Private Navy of Sgt. O’Farrell” and also accompanied Hope on his visits to military troops overseas.

As her film roles and national popularity increased, Lollobrigida was tagged “The Most Beautiful Woman in the World,” after her signature movie “Beautiful But Dangerous” (1955). Lollobrigida was nicknamed la ‘Lollo,’ as she embodied the model of Italian beauty. Her earthy looks and short hairdo were especially influential

In 1984, she starred in the popular television series Falcon Crest as Francesca Gioberti, a role originally written for Sophia Loren, who had turned it down. For that role, she received a third Golden Globe nomination. She also had a supporting role in the 1985 television miniseries Deceptions, co-starring with Stefanie Powers. The following year she appeared as guest star in the TV series The Love Boat.

In 1970s, Lollobrigida had embarked on a successful second career as a photographic journalist. She photographed, among others, Paul Newman, Salvador Dalí, Henry Kissinger, David Cassidy, Audrey Hepburn, Ella Fitzgerald and the German national football team. In 1973, a collection of her work was published under the title Italia Mia.

Along with photography, Lollobrigida had several successful art shows showcasing her dynamic, strong and expressive sculptures. Through her art, Lollobrigida supported causes such as UNICEF and Doctors Without Borders.

In 1985, she was nominated as an Officier of Ordre des Arts et des Lettres by Jack Lang for her achievements in photography and sculpture. She was also awarded the Légion d’honneur by François Mitterrand.

In 1999, Lollobrigida was nominated Goodwill Ambassador of the Food and Agriculture Organization of the United Nations (FAO).

In 2013, Lollobrigida sold her jewelry collection through Sotheby’s, and donated nearly $5-million proceeds of that sale to benefit stem cell therapy.