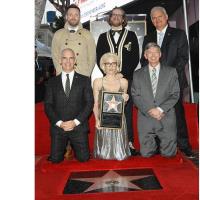 The Hollywood Chamber of Commerce honored actress Gillian Anderson with the 2,625th star on the Hollywood Walk of Fame on January 8, 2018 at 11:30 a.m. PST. The star was dedicated in the category of Television at 6508 Hollywood Boulevard next to the FOX Theatre.

“Gillian Anderson is a great addition to the stars immortalized on our Hollywood Walk of Fame,” stated Ana Martinez, Producer of the Walk of Fame ceremonies. “Her history as an actress on the popular show “The X-Files” as the iconic skeptic Dana Scully, a medical doctor, forensic pathologist and FBI agent inspired a generation of viewership and a following of fans all around the world.”

Award-winning film, television and theatre actress Gillian Anderson achieved international recognition for her role as ‘Special Agent Dana Scully’ on the American TV series "The X-Files.” Running for nine seasons from 1993-2002. Anderson won an Emmy, a Golden Globe and two Screen Actors’ Guild awards for the series. 2018 marks the 25th anniversary of the popular show and Season 11 premieres on FOX on January 3rd, with the second episode airing on January 10th at 8 p.m.

In film, Anderson has starred in “The Last King Of Scotland,” “The Mighty Celt,” “The House Of Mirth,” “Johnny English II,” “Shadow Dancer,” and “Sold”. Her Television credits include the critically-acclaimed “The Fall” and the Emmy- and BAFTA-winning mini-series “Bleak House” and “Great Expectations.”

On stage, Anderson has been nominated for two Olivier Awards; one of which was her recent performance of “Blanche Dubois” in the Young Vic Theatre’s production of Tennessee “A Street Car Named Desire.” Shewon the Evening Standard Award for this performance.In Spring 2016, the production thenrelocated to New York’s St Anne’s Warehouse. The start of 2016 saw Anderson appear in the hotly-anticipated international return of “The X-Files” and the BBC’s hugely successful adaptation of “War and Peace.” Currently, Anderson can be seen in the Starz series “American Gods,” based on the popular novel by Neil Gaiman. On the series, Anderson portrays the role of “Media” and received critical-acclaim for her diverse transformations portraying the likenesses of David Bowie, Marilyn Monroe, and Lucile Ball, and many others.

In addition, she will next be seen portraying ‘Lady Edwina Mountbatten’ in Gurinder Chadha’s “Viceroy’s House,” which premiered at the Berlin Film Festival in 2017, as well as Gilles Paquet-Brenner’s 2018 film “Crooked House” alongside Christina Hendricks and Glenn Close. Anderson has also wrapped production on Ryan Eslinger’s independent feature “UFO” with Ella Purnell, Alex Sharp and David Strathairn, and the action-comedy “The Spy Who Dumped Me”opposite Kate McKinnon, Mila Kunis and Justin Theroux.

Anderson is also an author. “The Sound of Seas,” the third novel in her science fiction “Earthend Saga,” was published by Simon & Schuster in September 2016. Anderson co-writes the thriller series with New York Times best-selling author Jeff Rovin. Her most recent novel is non- fiction and co-written with journalist and activist Jennifer Nadel, entitled “We – A Manifesto for Women Everywhere.” It was released by HarperCollins and Simon & Schuster in March 2017 and made the London Sunday Times best seller list.

Over the past 17 years, Anderson has been strongly involved in many charity organizations: as a board member of Artists For A New South Africa, a spokesperson for Neurofibromatosis Inc., a founding member of South African Youth Education for Sustainability (SA-YES), an ambassador for Survival International and a patron of the Alinyiikira Junior School in Uganda, among many others. She remains vocal about child and human trafficking, adult and child literacy, and the impact of commercial fishing on deep sea life.