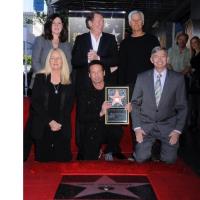 The Hollywood Chamber of Commerce honored actor David Duchovny with the 2,572nd star on the Hollywood Walk of Fame on Monday, January 25, 2016. The star in the category of Television was dedicated at 6508 Hollywood Boulevard in front of the FOX Theatre.

Helping Emcee and Hollywood Chamber President/CEO Leron Gubler to unveil the star were “X-Files” creator/director/executive producer Chris Carter and comedian Garry Shandling. “Fans are thrilled that their favorite actor David Duchovny has been honored with a star on the Hollywood Walk of Fame. He is beloved by audiences worldwide for his television and film work,” stated Ana Martinez, Producer of the Walk of Fame ceremonies.

Event was live-streamed exclusively on www.walkoffame.com

Born and raised in New York City, Duchovny attended Princeton University where he played one season as shooting guard on the school’s basketball team. He received his Master’s Degree in English Literature from Yale and was on the road to earning his Ph.D. when he caught the acting bug.

Fans will be happy to know that thirteen years after the original series run, the next mind-bending chapter of “The X-Files” will be back with a thrilling, six-episode event series from creator/executive producer Chris Carter, with stars Duchovny and Gillian Anderson re-inhabiting their roles as iconic FBI Agents Fox Mulder and Dana Scully.  This marks the momentous return of the Emmy- and Golden Globe Award-winning pop culture phenomenon, which remains one of the longest-running sci-fi series in network television history.

Since “The X-Files” debuted, millions and millions of self-proclaimed “X-Philes” spent their Sunday nights wide-eyed in anticipation as their hero, the brilliant and sullen FBI agent Fox Mulder, explored cases deemed unbelievable or unsolvable by the Bureau. Duchovny’s remarkable performance on   “The X-Files” earned him the title of “Zeitgeist Icon” by Laura Jacobs in The New Republic, and “the first Internet sex symbol with hair” by Maureen Dowd in The New York Times.

Duchovny added the role of director to his already extensive list of accomplishments when he wrote, directed and starred in three critically acclaimed episodes of “The X-Files,” titled “The Unnatural,” which starred Jessie Martin; and “Hollywood A.D.”, starring Garry Shandling and actress Tea Leoni, and “William”. Other directing credits include the Fox hit series “Bones,” as well as, six episodes of “Californication.”

Duchovny’s passion for renegade films has brought him critical acclaim for his performances in the feature films “Kalifornia,” in which he co-starred opposite Brad Pitt; “The Rapture,” the controversial film directed by Michael Tolkin in which Duchovny starred opposite Mimi Rogers; and “Julia Has Two Lovers,” in which he turned in a much heralded performance as a telephone hustler. Duchovny played Roland “Rollie” Totheroh, Charlie Chaplin’s longtime confidante and cameraman in the Sir Richard Attenborough directed  “Chaplin,” which starred Robert Downey, Jr. in the title role; and starred in the smash hit “Beethoven,” opposite Charles Grodin and Bonnie Hunt. Feature credits include the Dreamworks action-comedy “Evolution,” opposite Julianne Moore and directed by Ivan Reitman, the MGM romantic-comedy “Return To Me,” opposite Minnie Driver, directed by Bonnie Hunt. “The X-Files” movie, and “Playing God,” with Timothy Hutton and Angelina Jolie. David went on to appear in a hilariously funny cameo in Ben Stiller’s film “Zoolander.”

In 2002, he starred in the Miramax ensemble comedy “Full Frontal,” for director Steven Soderbergh, co-starring Julia Roberts and George Clooney. David made brief returns to television, first appearing in good friend Bonnie Hunt’s show “Life With Bonnie,” in which he guest starred as over-the-top weatherman Johnny Volcano, for which he was nominated for an Emmy in 2003. Following that, he made a memorable appearance on “Sex And The City,” as an ex-flame of Sarah Jessica Parker’s Carrie Bradshaw character.

He made his feature directorial debut in 2005 with “House Of D” which he also wrote and appeared in. The film, which starred Robin Williams and Anton Yelchin, vividly captured the spirit of youth in all its joy and heartbreak.

Other feature credits include “Trust The Man,” “The TV Set,” “Things We Lost In The Fire,” “The Secret,” “The X-Files: I Want To Believe,” and “The Joneses.”

Duchovny ventured onto the stage starring off Broadway in Neil LaBute’s play “The Break Of Noon” in which he reunited with his “X-Files: I Want To Believe” co-star Amanda Peet.

His other long-running series “Californication” ended its 7-year run in Summer of 2015 for Showtime. Hank Moody marked another seminal character portrayed by Duchovny that has made it’s its way into our pop culture lexicon, and for whose portrayal he won a Golden Globe Award for Best Actor in a Comedy series.

Duchovny recently released his first studio album for ThinkSay Records which is being distributed by Caroline, and is available for download on iTunes.

Earlier this year he was seen in the Tomorrow Studios /NBC series “Aquarius,” which he executive produced and in which he stars. The complete series was released on premiere day on NBC.com, the NBC app and VOD.  He is currently shooting the 2nd Season of “Aquarius” for NBC.

Duchovny supports several charities including his recent hosting of “Red Nose Charity Day” to raise money for impoverished children in the U.S.