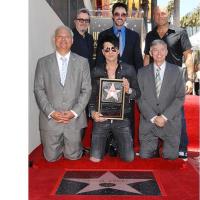 Watch us as the Hollywood Chamber honors Criss Angel exclusively on www.walkoffame.com

The Hollywood Chamber of Commerce honored illusionist Criss Angel with the 2,615th star on the Hollywood Walk of Fame today, on Thursday, July 20, 2017 at 11:30 a.m. PDT. The star was dedicated at 7018 Hollywood Boulevard next to the historic Hollywood Roosevelt Hotel and across the street from the star of Houdini!

“Hollywood is a magical place, and as we honor Criss Angel with his own star, the magic will continue to spread! We are very proud to include him on our famous Walk of Fame,” stated Walk of Fame Producer Ana Martinez.

For more than a decade, Criss Angel has dominated the world of magic as the biggest name on the planet. From his role as star, creator, executive producer and director of the most successful magic television series of all time, Criss Angel MINDFREAK on A&E Network, to his No. 1 best-selling Las Vegas stage shows Criss Angel BeLIEve andCriss Angel MINDFREAK LIVE!(in partnership with Cirque du Soleil® and MGM Resorts), to countless critically-acclaimed television specials and series, best-selling books, top-grossing retail products, music CDs and more, Angel is the most influential and imitated magician of the modern era. Hailing spectacular reviews from outlets such as Bloomberg Businessweek, who called him “the biggest name in Las Vegas magic,” Angel proves time and time again that he is a true force to be reckoned with and the most influential and imitated magician of the modern era.

His hit series MINDFREAK on A&E is the most successful magic show in television history, resulting in more hours of magic during primetime than any other magic show ever. The series continues to be viewed regularly by more than 100 million viewers in over 90 countries. According to law enforcement officials in Clearwater, Florida, the live broadcast of the show’s “Building Implosion” episode drew approximately 50,000 people to the venue, resulting in the largest crowd ever for any magician, rivaling Houdini. “Criss is the Best, THE BEST,” said Oprah Winfrey.

Angel’s next series, Criss Angel BeLIEve, premiered on Spike in October 2013 as Spike TV’s most-watched original series premiere in over 18 months. In November 2013, Endemol, the world’s largest independent production and distribution company, announced that it had acquired the international television distribution rights outside of North America to the series, and the show is currently seen in over 100 countries worldwide.

Angel recently created and directed a music video for Latin pop princess Belinda and world-renowned DJ/Producer Steve Aoki which will be released this summer.

Angel’s book, Criss Angel MINDFREAK: Secret Revelations (Harper Collins) was a national bestseller and is now in multiple printings. Angel is also an accomplished musician, having produced and performed on five self-titled CDs, which accompany all his live performances and TV appearances.

Angel has received numerous awards throughout his career. He has been named “Magician of the Year” an unprecedented six times, including from The Magic Castle—far more than any other magician. He was the youngest magician inducted into the International Magicians Society Hall of Fame. Angel was also presented with a Lifetime Achievement Award, The World Magic Legacy Award “A Living Legend,” at The World of Magic Seminar in Las Vegas. Additionally, Angel was recently named the first recipient of “Magician of the Decade,” as well as “Magician of the Century” and “Innovator of the Decade.” Angel received an International Magic Lifetime Achievement Award and was unanimously selected as the recipient of the 22nd Louie Award for Outstanding Achievement in the Art of Magic.

Angel is tireless in his ongoing efforts to help children through his charitable works. His Johnny Crisstopher Children’s Charitable Foundation, a JDS Foundation (formerly Believe Anything Is Possible), was renamed last year after his then two-year old son Johnny was diagnosed with leukemia. Angel has also received the Male Wish Granter of the Year Award and the Chris Greicius Celebrity Award for his work and dedication to the Make-A-Wish Foundation, having just granted his 50th wish.

The Hollywood Walk of Fame is an internationally-recognized Hollywood icon. With approximately 30 star ceremonies annually broadcast around the world, the constant reinforcement provided to the public has made the Walk of Fame a top visitor attraction. The Hollywood Chamber of Commerce continues to add stars on the Walk of Fame as the representative of the City of Los Angeles. The Walk of Fame is a tribute to all of those who worked diligently to develop the concept and to maintain this world-class tourist attraction. The Walk of Fame is open to the public. No paid admission or assigned seating at star ceremonies.It is understood that the cost of installing a star on the Walk of Fame upon approval is $40,000 and the sponsor of the nominee accepts the responsibility for arranging for payment to the Hollywood Historic Trust, a 501(c)3 charitable foundation. The funds are used to pay for the creation/installation of the star and ceremony, as well as maintenance of the Walk of Fame. Download the official app for iPhones and Android devices at http://officialhollywoodwalkoffameapp.com