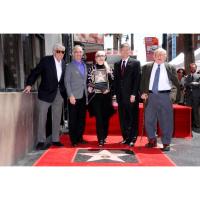 Watch LIVE as the Hollywood Chamber honors Barbara Bain with star on www.walkoffame.com

The Hollywood Chamber of Commerce honored actress Barbara Bain with the 2,579th star on the Hollywood Walk of Fame on April 28, 2016. The star in the category of Television was dedicated at 6767 Hollywood Boulevard in front of The Stella Adler Theatre where Bain studied acting.

“We are pleased to honor an actress who starred in many different shows and especially in the popular Mission: Impossible, one of the most important franchises in television and movie history,” stated Gubler.

Barbara Bain, three time Emmy® winner (Mission: Impossible), was born in Chicago and attended the University of Illinois at Urbana-Champaign. It is there she discovered her life-long passion: modern dance. Relocating to New York, Bain worked as a fashion model while studying with the master of modern dance, Martha Graham. Further exploring her interest in the performing arts, Bain began her acting training in the private class of the most famous and respected acting teachers, Lee Strasberg. After a successful audition, Bain accepted an invitation to become a member of the legendary Actors Studio.

After studying for 1½ years, Bain was cast in every one of the first three roles for which she auditioned. She also toured 26 cities with the Broadway road company of Paddy Chayefsky’s Middle of the Night, a tour which landed her in Los Angeles. Not long thereafter, she found work on some of the most popular television shows of the day. She appeared opposite Larry Hagman in United Artists’ Harbormaster and Darrin McGavin in the popular Mike Hammer series, and was cast in the recurring role of Karen Wells, love interest of David Janssen, in the seminal private-eye series, Richard Diamond, Private Detective.

Bain continued to appear in numerous television series: Tightrope, The Law and Mr. Jones, Straightaway and Adventures in Paradise. She also had the opportunity to flex her comedy skills in one of the classic The Dick Van Dyke Show, created by Carl Reiner. Bain also shined in her comedic role as Alma Sutton in the spy-comedy, Get Smart, created by Mel Brooks and Buck Henry. In between these two well-remembered appearances, Bain continued to be in demand, appearing in The Many Loves of Dobie Gillis, Hawaiian Eye, 77 Sunset Strip, Wagon Train, Ben Casey, My Mother the Car, and Perry Mason.

It was in 1966 that Bain would bring to life the role that would make her an international star. Created by Bruce Geller, Mission: Impossible which is celebrating its 50th anniversary was an espionage-thriller series, the likes of which had never appeared on television. Bain played Cinnamon Carter, a secret agent with beauty (her specialty was distraction) and the brains to match. For this role, Bain would become the first actress in television history to win three consecutive Emmy® awards for Lead Actress in a Dramatic Series, a record that would stand for nearly two decades.

In 1969, Bain appeared in a number of television movies: Murder Once Removed with John Forsythe, Goodnight, My Love directed by Peter Hyams, A Summer Without Boys and Steven Spielberg’s Savage.

In 1973, Bain accepted the invitation from British producers Gerry and Sylvia Anderson to appear in their new television series, Space: 1999, opposite her then-husband Martin Landau and actor Barry Morse ofThe Fugitive fame. Set some twenty-five years in the future, Space: 1999 was, at the time, the most expensive science fiction television series ever produced with feature film quality special effects. Bain appeared in Space: 1999 for two seasons as Doctor Helena Russell, a role that earned her much acclaim and millions more fans worldwide.

Following Space: 1999, Bain continued to make guest appearances in some of television’s hottest shows: The New Mike Hammer, Moonlighting, The Scarecrow and Mrs. King, Murder, She Wrote, My So-Called Life, Walker, Texas Ranger, Millennium, Strong Medicine, CSI: Crime Scene Investigation, and Likely Suspects. She also appeared in numerous feature films including American Gun (with James Coburn),Skinheads, The Spirit of '76, Forget Me Not, Nothing Special (with Karen Black),Panic (opposite William H. Macy and Donald Sutherland) and the forthcoming Silver Skies with George Hamilton and the late Alex Rocco. Recently, she has appeared in many short films, including Grace, Lost Music, Match Made and Pacific Edge, for which she was awarded Best Actress awards at both the Los Angeles Independent Film Festivaland the Golden Door International Film Festival.

Although Bain continues to work steadily in film and television, it is her stage to which she has dedicated much time. She has garnered Los Angeles Critics Circle and DramaLogue Awards for her acting in such plays as Arthur Kopit’s Wings, Eugene O’Neill’s A Long Day’s Journey Into Night, Samuel Beckett’s Happy Days and Eugène Ionesco’s The Chairs.

A continuing member of the Actors Studio where she teaches and directs, Bain has also directed numerous plays in 99-seat theater venues in Los Angeles. This June she returns for the 8th year working with the Blank Theatre’s Young Playwrights Festival, mentoring young writers aged 9 to 19 and directing their plays for production on the stage of the Stella Adler Theatre in Hollywood.

Twenty years ago, Bain founded the SAG Foundation’s (now SAG-AFTRA) BookPALS (Performing Artists for Literacy in Schools) program. She would travel weekly to Grape Street Elementary School in Watts for the next 15 years to read to kindergartners and first graders. Over the years, BookPALS has grown exponentially. Its mission to develop a love of reading and literacy amongst children has become an overwhelming success. Currently over 22,000 actors read in the classroom to 60,000 kids weekly in the United States.