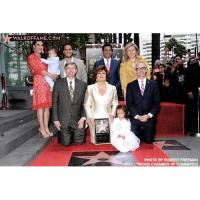 Watch LIVE as the Hollywood Chamber honors Angelica Maria exclusively on www.walkoffame.com
The Hollywood Chamber of Commerce honored Angélica María, Mexico’s sweetheart as she is affectionately known in Latin America with the 2,582nd star on the Hollywood Walk of Fame on Wednesday, May 25, 2016 at 11:30 a.m. PDT. The star in the category of Live Theatre/Performance was unveiled at 7060 Hollywood Boulevard in front of Live Nation.

Helping Emcee of the Hollywood Walk of Fame and Hollywood Chamber President/CEO Leron Gubler to unveil the star were Angélica Vale and Diego Boneta.

Angélica María, was born in New Orleans, LA and moved to Mexico at the age of 4. She is the daughter of musician Arnie Hartman and producer, writer and director Angelica Ortiz. Angélica María began her film career at the young age of five and has worked continually since then. At 8 years of age, she won the Mexican Film Academy Award, The Ariel, for the film “Mi Esposa y la Otra” (My Wife and the Mistress) in 1952.

Angélica María’s film career consists of 61 motion pictures, musicals, comedy to drama and thrillers. She began her career in television mostly in musical and variety shows, and eventually became one of the first actors to appear in primetime soap operas known as “novelas”. To this day, Angélica María has played in over 25 telenovelas. “Muchacha Italiana Viene a Casarse” (Italian Girl is Coming to Marry) became the breakthrough novela for Mexican television for the Televisa network playing in over 23 languages across the globe.

Angélica María debuted live on stage at the age of ten and has participated in 17 theatrical productions ranging from dramas to comedies to musicals. She has graced the most important stages in the Americas with extended seasons and renowned production companies such as, the iconic Teatro Lirico in Mexico City and The Hudson Theater in New York City among many.

At 17, Angélica María recorded her first album earning the title of “Mexico’s Sweetheart.” Since then, she has recorded 63 albums. In 1973, she’s credited for launching the “La Balada Ranchera” (Ranchera Ballad) musical genre which topped the charts and made Angélica María the first Latin singer to sell two million copies in the United States. She remains the only Mexican singer to fill two back-to-back shows on the same day at New York’s Madison Square Garden Arena. In 2008, she was honored with the coveted Latin Grammy Award for Musical Career Achievement.

Angélica María has made thousands of national and international tours, television shows, personal appearances, and has received more than 200 awards worldwide. In 2013, she was honored by the City of Los Angeles with the “Outstanding Citizen Tribute. In 2014, she was honored by the Los Angeles Times with the Latinos de Hoy Living Legend Award. After a 65-year-long career, Angélica María continues her work on television, film, stage, tours and concerts with the same passion, dedication and focus as day one! She is currently working alongside Sela Ward and Nick Nolte on the TV comedy series soon to be released on EPIX titled, “Graves.”

Angélica María is a proud Hollywood resident and is very active in civic and humanitarian endeavors in the Southern California community. She served as the United Nations Ambassador for World Malnutrition in 2008 and has worked tirelessly with Long Beach Hospital.

ALL PRESS MUST RSVP TO ANA MARTINEZ AT (323) 468-1376 OR Stargirl@hollywoodchamber.netmarle