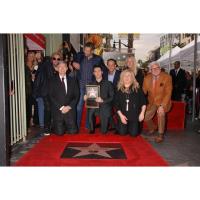 Watch us LIVE as the Hollywood Chamber honors Adam Levine exclusively on www.walkoffame.com

The Hollywood Chamber of Commerce proudly honored Adam Levine with the 2,601st star on the Hollywood Walk of Fame on Friday, February 10, 2017 at 11:30 a.m. PST. The star in the category of Recording was dedicated at 6752 Hollywood Boulevard in front of Hollywood’s Musicians Institute.
Helping Emcee and Hollywood Chamber President/CEO Leron Gubler to unveil the star were performers Blake Shelton and Sammy Hagar. Singer Gwen Stefani was also on hand for the event. “Adam Levine fans have been patiently waiting for this day. Fans from around the world have been constantly checking with us saying when, when… Now is the time, and we invite all of Adam’s fans to join us and enjoy Levine’s ‘moves like Jagger!’ and hear his voice.” stated Walk of Fame Producer Ana Martinez.

The Hollywood Chamber of Commerce is proud to announce that Adam Levine will be honored with the 2,601st star on the Hollywood Walk of Fame on Friday, February 10, 2017 at 11:30 a.m. PST. The star in the category of Recording will be dedicated at 6752 Hollywood Boulevard in front of Hollywood’s Musicians Institute.

As both the front man and primary songwriter of the multi-GRAMMY Award-winning band Maroon 5, Adam Levine continues to indelibly impact the face of modern popular music. Adam’s characteristic falsetto, a consistent infectious driving force behind scores of hit pop anthems and heartfelt ballads, has helped propel Maroon 5 into fast becoming one of the most successful worldwide acts in today’s popular music.

A native of Los Angeles, Adam founded the band Kara’s Flowers while still attending Brentwood High School. A few years later, the group would eventually transform into Maroon 5, quickly winning over both fans and critics alike with their hybrid pop rock/R&B sound. Since that time, Maroon 5 have gone on to quite an impressive career with both critical as well as commercial success. Their discography features a succession of five multi-platinum studio albums that have resulted in more than $20-million in sales, three GRAMMY Awards, 12 GRAMMY nominations, as well as gold and platinum certifications in over 35 countries. The band holds a Top 40 record that boasts a total of nine N. 1 hits among pop groups.

In 2011, Adam was the first artist to have a No. 1 Top 40 hit with Maroon 5’s “Move Like Jagger,” while simultaneously having another Top 10 solo hit on the Billboard chart with “Stereo Hearts,” (when he guested with Gym Class Heroes, which later went on to be No. 1). And in 2015, Adam remarkably hit No. 1 again when he was featured on “Locked Away” by R. City.

In addition to their immense sales history and chart dominance, Maroon 5 is also one of the most successful touring artists in pop music. When their current tour concludes in March 2017, the band will have played over 120 concerts in 30+ countries with more than 2,500,000 fans in attendance.

Outside of Maroon 5, Adam has recently broadened his entertainment resume to include both TV and motion picture roles. In February 2017, Adam will be returning for the 12th season as a coach (three-time winner) on the top-rated, three time EMMY Award winning NBC hit series The Voice (US). Adam’s other TV credits include American Horror Story: Asylum, Family Guy and 30 Rock, to name a few.

Next up, Levine will appear in the upcoming films Fun Mom Night that features Molly Shannon and Toni Collette and The Clapper, alongside Ed Helms and Amanda Seyfried.

Find your favorite star on the Hollywood Walk of Fam