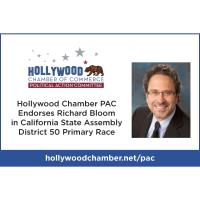 "The Hollywood Chamber PAC proudly supports Richard Bloom in his bid for reelection to represent the 50th Assembly District. His efforts in fostering economic development and job creation in the legislature are among the many reasons why we endorsed Richard,” stated PAC Chair Mark R. Edwards. ”We are confident that he will continue to advocate for and pursue policies that will address some of Hollywood’s most critical issues. He has established himself in Sacramento as an advocate for the arts and the Hollywood Chamber PAC is excited to continue working with Richard on any legislation that will further the arts in California, including the extension of the Film and Television Tax Credit legislation that has recently been introduced.

“It’s an honor to have earned the endorsement of the Hollywood Chamber of Commerce PAC,” said Assemblymember Richard Bloom. “I hope to continue building on the strides we’ve made in the Assembly in addressing the state’s homelessness and housing affordability crises, improving our schools, and protecting California’s environment while continuing to build a resilient economy and provide good jobs with tools like our successful film tax credit program.”