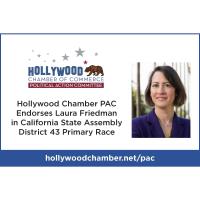 "The Hollywood Chamber PAC is proud to endorse Laura Friedman once again, this time in her bid for reelection to represent the 43rd Assembly District. Since elected, Laura has excellently represented Hollywood in the Capitol, pursuing bold policies in response to some of the district’s most pressing issues,” stated PAC Chair Mark R. Edwards. ”She has shown herself to be a leader in the Assembly and has consistently supported critical legislation, such as the Film and Television Tax Credits that will create jobs and continue revitalizing our state economy.”

Prior to being elected the Assembly, Friedman was highly active in local government, launched a small business, and was a film and television producer. Her commitment and service to her community is one among many reasons that the Hollywood Chamber PAC voted to once again endorse Assemblymember Friedman. She has been a fierce advocate for some of the most pressing issues in her district and has held local town hall meetings to shed light upon them, including affordable housing and mental illness affecting homelessness.

"It’s an honor to have been endorsed by the Hollywood Chamber of Commerce PAC,” said Assemblymember Laura Friedman. “Representing my district in Sacramento has been a tremendous privilege. Since taking office, I have authored a package of bills that seek to address issues that deeply affect my constituents but are equally felt by all Californians. I hope to continue working organizations like the Hollywood Chamber of Commerce in my next term to continue pushing for policies that will assist small business owners and help bolster our state’s economy.”

For further information about the Laura Friedman for Assembly 2018 campaign, please visit: https://www.votelaurafriedman.com