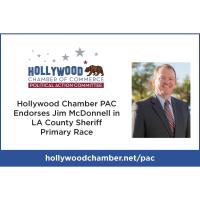 “The Hollywood Chamber PAC is proud to endorse Sheriff McDonnell once again in his run for L.A County Sheriff. In his over three decades of public service, not only has McDonnell served as Chief of Police for the City of Long Beach, the second largest city in Los Angeles County but has also held every rank in the LAPD, including First Assistant Chief and second in command to Police Chief Bill Bratton.” stated PAC Chair Mark R. Edwards. “Throughout his first term as Sheriff, McDonnell continued to show his remarkable ability as an experienced leader.”

The Chamber PAC supports Sheriff McDonnell’s commitment to prevention-oriented strategies and dedication to proactively addressing the root causes of crime. McDonnell has stressed the importance of treating all members of our community with respect, being transparent with and accountable to the individuals that the LASD serves. The PAC is certain he will continue to collaborate with community leaders in the many diverse neighborhoods across Los Angeles County to enhance community relations and promote safe neighborhoods.

"I am proud and honored to have the endorsement of the Hollywood Chamber of Commerce PAC,” stated Sheriff McDonnell.  “Since taking the oath of office and being sworn in as the 32nd Sheriff of L.A. County, I have remained committed to ensuring that safe streets and neighborhoods enable all residents and businesses in L.A.’s diverse County to thrive. I will continue to work with organizations like the Hollywood Chamber to ensure that we continue to keep all communities safe and prosperous for all."