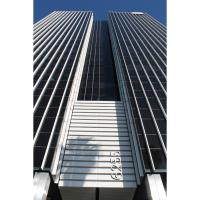 After nearly 25 years in the same location adjacent to the Hollywood Roosevelt Hotel, the Hollywood Chamber of Commerce is making a big move to the Sunset Media Center at 6255 Sunset Blvd, Ste 150. The telephone and fax numbers, email and website addresses remain the same. Please be patient while we transition to the new office.

“Interestingly enough, the Chamber will be returning to the same building that was our previous home,” said Chamber President & CEO Leron Gubler. “The only difference is that the Chamber was then located on the ninth floor. Now we will be relocating to the ground floor and mezzanine.”

The Chamber move was necessitated when the Roosevelt Hotel needed its space back. A Chamber committee has been working for nearly two years identifying a new location for the Chamber. “We are very appreciative to the Roosevelt management for giving us plenty of time to plan for this move,” commented Gubler. He noted the new office will provide a state-of-the art, newly built-out space for the Chamber. A large conference room similar to the current board room will be provided as well as a smaller conference room that will house the Johnny Grant Library, presented by Variety.

As a benefit to Chamber members, the new office will provide two hours free parking to visitors to the new office. “Kilroy Realty, our new landlord, has bent over backwards to accommodate our needs,” Gubler noted. “We are deeply indebted to them for making this so easy for us.”

The Chamber has been located on either Hollywood Blvd. or Sunset Blvd. during its almost 95-year history. Founded in 1921, the first home of the Chamber was at 6553 Hollywood Blvd. In 1923, they relocated to 6530 Hollywood Blvd. However, immediately after that move, the Chamber started searching for a site on which to erect a new headquarters building. On November 3, 1925, a building permit was pulled for a two-story building at 6520 Sunset Boulevard. The building included an elaborate Churrigueresque ornamental pediment over the front entrance. A grand opening ceremony for the new building was held on July 14, 1926. The 7,500-sq.ft. building included a large auditorium, which could seat 400 people. The Chamber subleased space within the building to the county tax assessor, to the IRS, and during World War II to the USO.

However, by 1976, the Chamber decided that it would be more economical to lease office space rather than to own their headquarters. They sold the building to the Schaeffer Photo and Camera Supply Company. The Chamber moved its offices to the Sunset Vine Tower on the southeast corner of Sunset and Vine, and then moved to 6255 Sunset Blvd. about 1998. In 1992, the Chamber offices were moved to the Hollywood Roosevelt Hotel, initially in the hotel’s cabanas while its office space was built-out in what had once been the Meglin Dance Studio.

Members of the task force that oversaw the relocation of the Chamber included: Donelle Dadigan (chair) of the Hollywood History Museum, Marty Shelton of NAI Capital Commercial, Mark Panatier of A.F. Gilmore Co., and Jeff Zarrinnam of the Hollywood Hotel. “Committee members spent countless hours volunteering their time to see that the Chamber ended up with an amazing location,” said Gubler. An open house to welcome Chamber members to the new office is being planned for February 14th. Stay tuned for additional information.
Contact:
Hollywood Chamber
info@hollywoodchamber.net, (323) 469-8311