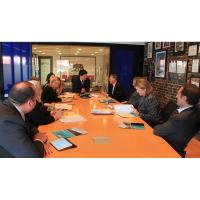 “The CEQA law has done a lot of good in preserving California’s environment since it was approved during Ronald Reagan’s administration as Governor,” said Chamber President & CEO Leron Gubler. “However, CEQA abuse has grown in recent years as people have manipulated CEQA for purposes that have nothing to do with the environment.”

Gubler pointed out that CEQA-based lawsuits can delay or stop projects for years. “The Sunset-Gordon project is a great case in point,” he continued. “The original Gerding-Edlen developers won court cases every step of the way, but the plaintiffs managed to delay the project for more than two years resulting in the developer losing the property. The system is broken when cases are allowed to drag on practically forever. That is a miscarriage of justice.”

The Chamber urged the senator to use his leadership post to press for change.

“The meeting was very worthwhile,” said Bill Roschen, who chaired the Chamber’s Major Businesses Task Force that worked on the effort. “I think the interest level from the Senator and his staff was very high. I believe he is open to opportunities to improve CEQA.”

He noted the Chamber’s interest is not in gutting or voiding CEQA. Rather, the Chamber wants to see reforms that will create a more even-handed approach in dealing with CEQA applications.

Gubler said that an analysis of all published court decisions from 1997 to 2012 in which a development project’s Environmental Impact Report was challenged revealed that 59 percent of challenged projects were identified as either infill or greenfield and more than a third, 36 percent, of projects challenged involved public works projects. The most commonly-challenged types of projects involve public infrastructure and mixed-use developments.

In a well-documented case in San Francisco, anti-abortion activists filed a CEQA lawsuit against a Planned Parenthood clinic, alleging planners had not taken into account the environmental impacts – specifically the noise and traffic disruptions caused by the activists’ own protests.

The San Francisco Chronicle editorialized that “we can now add women’s health services to the toll of public goods that have been stymied by the California Legislature’s refusal to stand up to the interest groups who seem to think CEQA should remain carved in stone.”

The amount of CEQA abuse has finally begun to get attention in Sacramento. Last year, in the report “California High Housing Costs Cause & Consequences”, the California Legislative Analyst Office (LAO) cited CEQA as a major impediment to building enough housing in the state. The LAO said that CEQA is a factor in California’s lack of housing supply, which leads to higher housing costs that burden working families and low income residents, and serve as a drag on our economy.

“Obtaining reasonable reforms to CEQA has been a major priority of our Chamber for several years. We look forward to working with Senator de León and other legislators to achieve that end,” concluded Gubler.