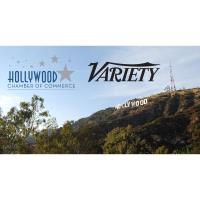 HOLLYWOOD, CA—The Hollywood Chamber of Commerce is proud to announce an exclusive 5-year partnership with Variety, slated to begin in 2016 and go through the end of 2020.

As the exclusive media partner to the Chamber, Variety will continue to live stream the Hollywood Walk of Fame ceremonies for broadcasting around the world for another five years. This continues a relationship between the Chamber and Variety that began in 2012. As the Hollywood Chamber oversees this famous landmark and performs approximately twenty five star ceremonies each year, live streaming these events plays a vital role in the international recognition of the Hollywood Walk of Fame.

As part of the partnership, Variety will also serve as top sponsor for various high-level events for the Chamber including the State of Hollywood Address, Media Welcome Center hosted the week of the Academy Awards, the State of the Entertainment Industry Conference, and several others.

The Hollywood Chamber of Commerce has worked closely with Variety for many years, however, an exclusive partnership of this extent is a first for both the Chamber and for the entertainment publication. “Variety has made a significant impact on elevating our brand and adding terrific exposure to our events. Ultimately, our members and the community also benefit from this partnership,” said Kaylee Kiecker, Executive Vice President for the Hollywood Chamber of Commerce.

Chamber President and CEO Leron Gubler added, “This has been a tremendous partnership for the Chamber. We appreciate the strong support that Variety has provided for the Chamber’s many initiatives. We look forward to continuing this relationship for the next five years.”
-30-