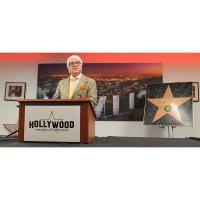 The new selections were revealed to the world via live stream exclusively on the official website www.walkoffame.com. The live stream began at 2:15 p.m. PDT and was held at the Hollywood Chamber of Commerce offices.

“The Walk of Fame Selection Committee is pleased to announce our newest honorees to the Hollywood Walk of Fame. The Committee looked carefully at each nominee and we feel that we have selected an eclectic group of talent that will appeal to the tastes of many fans around the world,” said Di Bona. “As a Walk of Famer myself, I know these honorees will remember the dedication of their stars with great memories and will be proud that they are part of Hollywood’s history now and forever. We look forward to their big day as the Walk of Fame Class of 2018 becomes cemented one by one on the most famous sidewalk in the world!”

The Hollywood Walk of Fame Class of 2018 are:

In the category of RADIO:   Steve Jones

The Hollywood Chamber of Commerce and its Walk of Fame Selection Committee congratulate all the honorees. Dates have not been scheduled for these star ceremonies. Recipients have two years to schedule star ceremonies from the date of selection before they expire. Upcoming star ceremonies are usually announced ten days prior to dedication on the official website www.walkoffame.com.