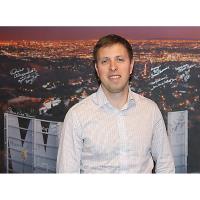 The Hollywood Chamber of Commerce has partnered with the Hollywood Entertainment BID in co-sponsoring Coro-Fellow Jake Itzkowitz who will be researching what other cities do to preserve and protect their landmarks similar to the Walk of Fame in Hollywood. The research will look into such landmarks as the Freedom Trail in downtown Boston in Massachusetts and the famous San Antonio River in Texas. Itzkowitz will gather information that may help the organization to enhance the experience of Hollywood’s landmark. “We are excited to have a Coro-fellow to do this research and we’re looking forward for the results,” said Leron Gubler, President & CEO of the Hollywood Chamber.

Itzkowitz will be working on a project around preserving and protecting Hollywood Walk of Fame which is one of Hollywood’s main tourist destination. The project will be focusing on three main areas: The goal of the project is to think broadly about possible ways to preserve and protect the Walk, and to present outside-the-box possibilities for the Hollywood Chamber and the BID to pursue.

Itzkowitz will be preparing a white paper on his research findings and proposed action steps and will be presenting his conclusions to the Chamber and BID Boards. The presentation will be held at the Hollywood Chamber on Friday, April 6th at 9 a.m.

Itzkowitz is an attorney with a background in city legislation, community engagement, and historic preservation law. He graduated from McGill University in 2008, where he served as Student Society President. He worked as a Regional Director for the 2008 Obama presidential campaign, and on several other political campaigns before working as campaign manager for Margaret Chin’s successful 2009 New York City Council campaign. He worked as Councilmember Chin’s Chief of Staff for two years, where he helped create the Chinatown Business Improvement District and advocated for funding for senior and low-income housing. In 2011, Jake began studying at Georgetown University Law Center, graduating with a J.D. in 2014. After graduation, he worked for the law firm of Akin Gump Strauss Hauer & Feld, first in New York City and then in Los Angeles. Jake left Akin Gump in 2016 to participate in the Coro Fellowship in Public Affairs.

Coro Fellows Program uses the city as a classroom to train the next generation of change makers. Their Neighborhood and Community Leadership programs work with emerging and established leaders in specific geographic neighborhoods. Program participants identify local issues in their community and then work with Coro trainers to develop and carry out innovative and proactive solutions.

Hollywood Entertainment District Business Improvement District
The Hollywood Entertainment District is a ten-year Business Improvement District (BID) that stretches along the world-famous Walk of Fame and spans historic Hollywood Boulevard, from the LaBrea Avenue Gateway on the west to the Hollywood 101 Freeway on the east. Formed in 1996, the HED BID has been renewed three times and has been authorized by a Los Angeles City ordinance to operate through Dec. 31, 2018. This District has served as a fundamental underpinning to the overall Hollywood revitalization success story. The BID is funded by more than 500 property owners. The annual budget of $3.5 million is used primarily for private security and maintenance services. For more information, please visit http://onlyinhollywood.org/hollywood-bid/