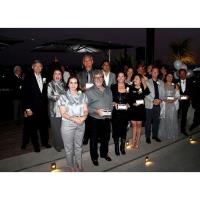 The Hollywood Chamber of Commerce held its “Celebration of Anniversary Events” where Leron Gubler was recognized for his 25 years at the helm of the Chamber! The Celebration of Hollywood Anniversaries was held on Tuesday, September 19th at the new Kimpton Everly Hotel poolside.